What are Kirk Session records?

The kirk session is the local court of the presbyterian Church of Scotland. It is made up of: the minister (moderator or chair), the elders and a session clerk (the chief elder). Sometimes there was no session clerk, only a clerk who kept minutes. The records can include: minutes of session meetings, accounts, communicant rolls, the poor fund.

What was the role of the Kirk Session?

Historically the kirk session dealt with parish matters, spiritual, moral and social, as well as the general running of the church. The session took parishioners to task for things like immoral behaviour, particularly fornication, Sabbath-breaking, swearing, fighting, or not attending church. 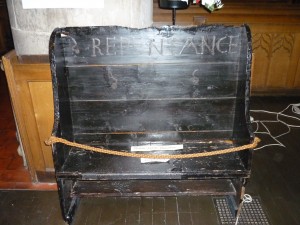 There was a range of punishments, with public repentance or penance the most well-known.

Until the Poor Law (Scotland) Act of 1845, the kirk session was also a key agent in poor relief. This is one reason why illegitimate children were such a concern: unless the father was identified and took responsibility the parish might have to support mother and child financially.

The kirk session would refer more serious cases, serial fornicators for example, to Presbytery. This is the next level up, and comprised of the minister and an elder from each parish in the area. The highest court of the Church of Scotland is the General Assembly which meets annually. Until the 1990s there was also Synod, the court between Presbytery and the General Assembly.

The value of Kirk Session minutes

Kirk session minutes give space to the ordinary people who may feature in no other record beyond a few censuses and possibly a baptism, marriage or burial register. You may find no more than a name, perhaps recording your ancestor as a new communicant or receiving money from the poors fund. Don’t discount that. I know that one set of my x3 great grandparents died after a date in 1826 for at that time the local church gave them money for a particular purpose.

In other cases, kirk session minutes can provide the vital information to break down a brick wall by naming the father of an illegitimate child. You may find out quite a lot about the circumstances too!

Some kirk session records contain baptisms, marriages and burials that are not included in the old parish registers (OPRs). These can sometimes be quite substantial lists; in other cases they are sporadic. Pre-1841 population lists and rolls of male heads of families are two other resources you may find, the former fairly rare, the latter much more common. The National Records of Scotland catalogue records will often include a note about these elements. Or check Parish Registers in the Kirk Session Minutes of the Church of Scotland (Diane Baptie, 2001) available from SAFHS or the Scottish Genealogy Society.

Very broadly, kirk session records are most useful before 1855. During the 19th century the declining role of the Church in society generally meant that records focused increasingly on strictly church matters. In more rural areas this change was slower.  Up to the 1880s, and beyond in some cases, I would still check them. Censure for ante-nuptial fornication was relatively common in my one-place study parish in the 1870s, for example. (See my page for more on the records there)

Where can I find these records?

Kirk session records are not indexed so searching can be time-consuming. Names are sometimes written in the margins which is a great help.The content also varies; in some parishes it is mainly financial records that survive.

If you can’t get to the archives yourself, I can do some paid research for you. Contact me.

I haven’t quite made the A to Z blogging challenge this year, maybe next year, but this is day K (13 April 2017) so I’ve made a start.