Private William Victor Linklater Sclater, S/12854, 6th Platoon, B Company, 7th Battalion Seaforth Highlanders, died at the Somme 100 years ago today, 12 October 1916. A name and a number among many who fell that day. He has no known grave, only his name on the Thiepval Memorial. To his family, he was a much loved son and brother. 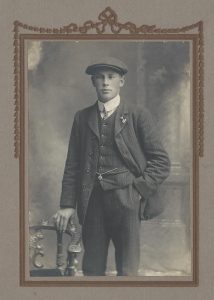 Victor, as he was known, was born at Kebro, Orphir, Orkney, on 1 December 1894. He was the fourth son and seventh child of James S Sclater, farmer, and his wife, Jessie Linklater. James owned Kebro but also rented the farm of Groundwater, a mile or so down the valley, overlooking the Kirbister Loch. The older offspring farmed and lived there. Among the hard work, they had a lot of fun! The 1911 census shows the 16 year old Victor at Groundwater with five older siblings including my grandmother, Jessie, aged 24. She never got over the loss of her brother.

Victor was conscripted in spring 1916 (probably May) and trained at Cromarty before going to France. 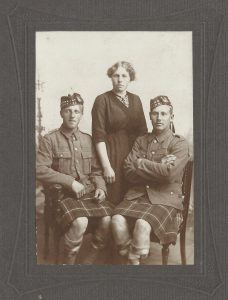 In his letters from Cromarty he spoke of a visit home, they would see him, he said, “come swinging over Jennyval in my kilt”. (Jennyval is a hill above Kebro.) Due to disease in the camp, that visit never happened. By 12 September 1916 he was in France.

His last letter home, to his sister Barbara, was written on 1 October 1916. He noted that “the weather is still fine and warm but it is getting cold in the mornings”.  He had been on a bathing parade that day which involved a three mile walk.

“It did not look very like Sunday as we were going along the road for some of them were ploughing and a crowd of women were taking up potatoes. They were digging them up with spades and they have a steam-mill that goes from house to house threshing the crop and it was working away also.”

In this strange world, where even the quiet of Sunday had gone, perhaps the familiar sights of farm life brought something to which he could relate.

The diary of the 7th Battalion Seaforths for 12 October 1916 makes harrowing reading. They were at  Eaucourt l’Abbaye attempting to take the Butte de Warlencourt. Things went very badly. There were hundreds of casualties in the 7th battalion alone with the trenches so full of bodies and wounded men that movement was very difficult. A family friend, who survived the war, offered to help the wounded Victor but he replied “I think I’ll just lie here for a while”. Possibly he knew he would never see home again.

Victor was one of ten Orcadians from the 7th Seaforths who died that day at the Somme 100 years ago; two others died of their wounds within days (see Orcadian casualities in the Battle of the Somme)(pdf). His name is on the war memorial in Orphir, Orkney. Gone but never forgotten by his family.