In 1888 many Orkney crofters applied to the very new Crofters’ Commission for rent reductions. WR Mackintosh’s The Orkney Crofters records their oral evidence and the outcomes of their applications. The book is long out of print but I have transcribed the pages relating to North Walls and Brims. (Crofters – those paying rent of less than £30 per year, mainly with a second occupation.)

Applications from North Walls and Brims, 1888

The Crofters’ Commission visited Orkney between 14 August and 22 September 1888 to hear evidence from and inspect the land rented by 443 Orkney crofters. That evidence is a fascinating piece of social history. It details their efforts to improve their land as well as the issues they faced such as increasing rents and decreasing common grazing. In some cases crofters stated how long they had been in the croft or gave other information of direct interest to family historians.

The Orcadian newspaper reported extensively on the hearings and their outcomes. William R Mackintosh, editor and later proprietor of the newspaper, compiled the material and in 1889 The Orcadian published The Orkney Crofters.

The National Records of Scotland, Edinburgh, holds the formal applications to the Crofters’ Commission (later Scottish Land Court), class LC23/1 and LC23/2. The key points are the same as the oral hearings but the colour of the latter is missing.

My transcription of the North Walls and Brims pages (pdf). (From a copy of the book viewed at the National Library of Scotland, Edinburgh.) The Orkney Room, The Orkney Library and Archive, Kirkwall also has a copy. I’ve included the names and addresses of South Walls and Fara crofters but not their evidence.

Though large numbers of applications were made in the early years they continued later, with some crofters applying more than once. Again, The Orcadian is a good source for reports of the hearings.

Some background to the Crofters’ Commission

The Royal Commission of Inquiry into the Condition of Crofters and Cottars in the Highlands and Islands was set up in 1883 as a response to growing discontent and demonstration in the west Highlands notably, with iconic incidents like the ‘Battle of the Braes’ in 1882 in Skye. Excessive rents, lack of security of tenure, loss of common grazing, evictions, no compensation for improvements to holdings, and falling incomes were some of the factors behind the discontent.

The Napier Commission, as it became known after its chair, Lord Napier, heard evidence from crofters, cottars, lairds and others with a knowledge of the situation, in the seven crofting counties of Argyllshire, Inverness-shire, Ross and Cromarty, Sutherland, Caithness, Orkney and Shetland, and reported in 1884. William PL Thomson’s Orkney Crofters in crisis (published by The Orcadian, Kirkwall, 2013) contains the verbatim transcripts of that evidence, along with supplementary information submitted later. The transcripts are also available online: http://www.napier-orkney.blogspot.co.uk/.

Alexander Wilson, formerly of “Linehouse” [Lyness surely], then of Rendall, spoke of his time in Walls (Thomson pp 246-9), but no-one else from the parish.

This act was passed in 1886 and applied to what were deemed to be ‘crofting parishes’. This included all the Orkney parishes, though Orkney’s inclusion was at first disputed. It also established The Crofters’ Commission with power to fix fair rents and cancel arrears, where it saw fit. Applications for the enlargement of holdings were also part of its remit. Faced with a high volume of applications, it was August 1888 before the Commission made its first visit to Orkney. David Brand, Sheriff of Ayr was chairman and David Hosack, a land valuer in Oban (Thomson p317) was with him in the hearings for Walls. The valuer and assessor sometimes inspected the land on the same day as the hearing.

In Orkney as a whole, there were 443 applications for fair rent and several applications for extension of holdings. They resulted in a 30% reduction in rents overall and the cancellation of 44% of arrears. (Mackintosh The Orkney Crofters pvi). 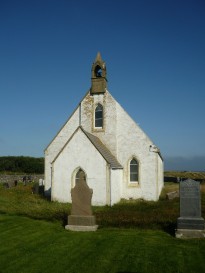