Mary Sclater is one of those sidelines I became drawn into when looking for someone else. She was a first cousin of my great grandfather William H Slater (1845-1913), so my first cousin three times removed. As I’m still working on her, this week’s blog is very much a current state of research illustrating the variety of sources I have used and plan to use.

The starting point for my interest was finding her in the 1861 census in Edinburgh. At that time she was a 25 year old teacher of general subjects. Her landlady was my real interest at that point.

Mary was born in Kirkwall, Orkney on 12 January 1836, the daughter of John Sclater, flesher and later grocer, and Isabella Linay or Lennie. She was baptised by the Rev Robert Paterson. From my own knowledge, that immediately tells me the family did not belong to the established Church of Scotland but were members of what became the United Presbyterian Church. (Ecclegen is a good source for finding out more about ministers.) This is relevant to the overall theme.

As far as I could see, she did not marry in Scotland and her death record was not immediately obvious. The best match was a Mary Sclater, missionary, aged 49, who died at Mavisbank House, Lasswade, Midlothian on 11 August 1886. The age was a year too young and there were no parents’ names, probably because the death was registered by the “head attendant”. Though Mavisbank House might have sounded grand that word “attendant” hinted strongly at institution, probably asylum. I was right, though designed by William Adam as a country house, it became an asylum in 1876.

I needed to check this was the right woman so, in case she was at Mavisbank in 1881, I checked the census hoping to find a birthplace. Mary Sclater, former missionary, aged 44, born Kirkwall, Orkney, was recorded as an inmate at Mavisbank Lunatic Asylum. Again the age about one year out but this was looking increasingly like the right woman.

From there I went to the General Register of Lunatics, MC7, National Records of Scotland. (Many of these records are indexed now on Scottish Indexes and Old Scottish.) There were two results:

That meant there were also two notices of admission to follow up, one for each asylum (National Records of Scotland, MC2).

The Roxburgh Asylum admission stated she had been ill for four years, caused by “solitude and African residence”. “Vanity with a certain amount of petulence are the most marked phenomena of mental aberration”, according to the  report. “Delusions”, formerly the chief feature of her ailment, were now “abandoned or concealed”. The record also gave her brother John’s address in Manchester. His name provided the final proof that this was the correct woman.

“She labours under mania”, said the Mavisbank admission, repeating that solitude and African residence were the cause. She had been a missionary and “lady teacher” in South Africa with her brother John. It also reveals that she was detained at the Roxburgh Asylum at his instance. That explains the private, rather than pauper, patient. He was paying for her to be there. To me this was quite chilling and I felt a good deal of sympathy for Mary.

The Orkney Herald, June 1860-December 1871, has been digitised through the British Newspaper Archive and proved a rich source of information on Mary and John. Firstly, 19 January 1864 (p4 col d) 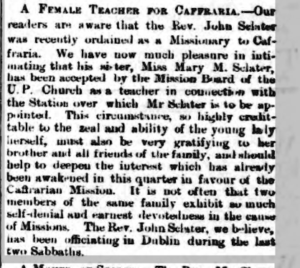 Mary and John went to Emgwali, South Africa, arriving in early November 1864 (Orkney Herald, 3 January 1865 p2 col d). (For Caffraria see Kaffraria.) After a few years they moved to set up a mission station at Mbulu, later named Paterson. On arriving there, they were without baggage for two days. “During this time we had to sleep, without blanket or change of clothes, on a straw mat on the ground. The chief’s wife at last took pity on me, and gave me the loan of a cotton one” (letter from Mary quoted in the Orkney Herald 16 July 1867 p3 col a). She went on to describe her teaching: “It is no uncommon thing, after I have retired for the night, to see them all spelling away with great gusto before the flickering blaze of a wood-fire”.

The Missions of the United Presbyterian Church (1896) (George Robson et al.) includes a section on the Kaffrarian Mission. John, and presumably Mary though she has only one mention, went on furlough in 1873. Cross-referencing with the asylum records, it is likely that Mary never went back as she had been ill for four years before her admission to Roxburgh Asylum in 1877. John married in Edinburgh on 1 July 1875 and accepted a call to Coupland Street Church, Manchester in 1876 so I don’t think he went back either.

I feel very sympathetic to Mary; the description of her illness does not make me think she should have been in an asylum but I’ll not say too much until I’ve seen any more detailed case papers. It’s maybe worth noting that Mary’s mother, Isabella, died in February 1864, months before the departure for Africa. If adjusting to life in Africa was hard, the reverse process in 1870s Scotland must have been at least as tough. Not least as a woman, maybe with her heart in work back in South Africa. A frustrated calling?

The theme for #52ancestors this week was ‘Going to the chapel’. As chapel is a word I associate much more with Wales than Scotland I’ve interpreted it fairly broadly!