People sometimes get fixated on spelling. “No Angus McCallum can’t be my ancestor, we are MacCallums”. Maybe so, but in the past spelling of names was quite fluid. ScotlandsPeople has a very good guide on why surname spelling varies. All things considered, the Mc/Mac differences may well be the least of your problems.

Slatero or slater is the Orkney name for a wood louse. I have a lot of Slaters in my ancestry, and the trouble starts with my grandmother. She was born in 1887 and registered as Jessie Slater, though she was known as Jessie Sclater, until she married and became Mrs Slater. Are you still with me? All but one of her ten siblings were registered and known as Sclater. Her father’s name at birth in 1857 was James S Slater but he married as James S Sclater in 1883. Looking at a variety of birth, marriage, death and census records, I would say that the change from Slater to Sclater took place in the 1870s though there is a patch of Sclater in the 1820s/early 1830s.

The variation is different in my grandfather’s line, James Slater (1890-1967) husband of Jessie Slater/Sclater. As far as I can be sure about his direct paternal line, the surname is Slater. But his great uncle was baptised as John Slater (1811-1880) married as John Sclater and kept the ‘c’ in Sclater in all his life events and the baptisms or births of his children. Alexander (1880-1963) and Annie (1884-1968), two of my grandfather’s nine siblings, also added a ‘c’ some of the time at least. Why? It was apparently considered to be the posher spelling.

Finding all the different variants can be critical. A relative doing research years ago went wrong on one line due to not looking at all the possible spellings and stopping at the first person who seemed to fit.

How can I be sure I’m finding the right people?

I know of the Slater/Sclater variants but others can be trickier to identify. Ross/Rosie, another changing name in my tree, is not particularly evident, especially if you are not familiar with northern Scottish surnames. You will need to examine more than just the birth or baptism record to be sure you have the right person.

If you are searching on ScotlandsPeople you have options. The default is Exact names only so if you search on Slater you will only get records with that surname.

What are the options?

The Name variants option handles the Mc/Mac issue and often includes less evident variants too but it has limitations. 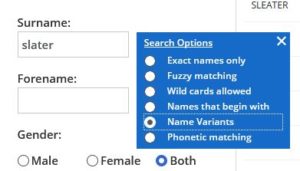 The others are:Fuzzy matching, Wildcards allowed, Names that begin with, and Phonetic matching. There’s an explanation on how to use them here. You don’t even have to use a surname but that is best tried if you are searching a small area over a short period or the first name is very unusual.

My preferred approach is often to use an asterisk (*) or %. In ScotlandsPeople searches they can replace zero or more characters so are a very useful way to tackle idiosyncratic spellings in the Old Parish Registers in particular.

Just to illustrate, I ran a search on baptisms with the surname Slater, in Orkney, 1700-1854, and here are the numbers of results from each search:

Overall, for this surname, I think the wildcard search worked best. Other surnames will be different. Try the different searches and see how you get on. You may have a long list with some unrelated surnames but the extra minutes spent scanning that list are worth it to find the right person.

I’ve focused on ScotlandsPeople here, other sites have some similar options so it’s worth spending time understanding how each site works.

A slightly different take on the #52ancestors topic “Same name” for the week of 17 June.