There were several teachers in my family tree but I’m focusing on one this time: Auntie Mimie.

Auntie Mimie was born at Gara, Orphir on 18 January 1892, the ninth child of William H Slater and Tomima Groundwater. The family was poor, work was scarce. My maternal grandfather, James, one of her older brothers, effectively left school at 12 when he was taken out to herd cattle for part of the summer and then abandoned by the teacher when he returned as he was so far behind. He valued education, for girls anyway, so may have played a part in her decision to be a teacher. I don’t know for sure.

What is clear is that as one of the youngest children, she was at an advantage. Financial pressures lessened as the older slblings left home and made their own way in the world. After primary school in Orphir, she went on to Kirkwall Grammar School, as did her younger brother Alfred. There the young Mimie gained the Higher Leaving certificate in English, French, Maths, Latin and Greek in 1910. Like many Scottish pupils, she then did a sixth year, appearing in the 1911 census as a boarder with her uncle, James F Groundwater, and family in Kirkwall.

I know from her university record that Mimie began study at Edinburgh University in the 1911-1912 session. My mother, her niece, recounts that the family’s landlord in Orkney wanted Mimie to be a pupil teacher but she resolved to be a proper teacher. Knowing the grit and determination of my mother’s line, I’m not at all surprised she reacted thus!

Going to study in Edinburgh must have been a big step with financial and other challenges. Again, being one of the youngest in the family helped. Her oldest sister, Bella (Mrs John Aitkin), had  married and was living in Edinburgh which meant lodgings were available. Student grants only began in Scotland in 1947 so Mimie would have had to seek support elsewhere, possibly through a competitive Carnegie Trust or Highlands and Islands Educational Trust bursary. Edinburgh University’s Calendars show that she was proxime accessit (runner up) for the Scottish Text Society’s prize in her final year so perhaps a little money late in the day. 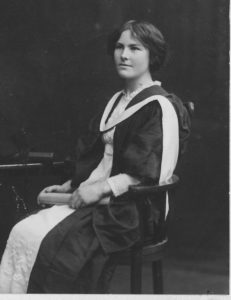 Women first graduated from Edinburgh University in 1893, less than 20 years before Mimie went there. From my research, it is likely that she was among the first 1000 women graduates from Edinburgh when she gained her MA in October 1914.

She took an ordinary rather than an honours degree. Her subjects were: French, Latin, English, British History, Psychology and Moral Philosophy. She then did teacher training and in January 1916 was appointed teacher of English at Kirkwall Burgh School.

After teaching in Edinburgh and elsewhere in the south of Scotland, Mimie returned to Orkney in the early 1950s and taught in the island of Wyre until she retired. Gordon Brown, her Edinburgh-born husband, found life on a very small island rather testing. They both died within months of each other in 1956, Mimie as the result of a road traffic accident while she was cycling.

A #52ancestors challenge post on the theme ‘Back to school’.