A very overdue update on my last post where I talked about a big discovery thanks to Ancestry’s ‘shaky leaves’ hints.  Well I checked out the records cited, the research seemed correct and I made contact with the owner of the tree on Ancestry. He is my fourth cousin, a descendant of Jean, sister of my great great grandmother, Barbara Sinclair. Jean immigrated to Australia with her father, Thomas Sinclair, step-mother and half siblings in the 1850s. She and Barbara wrote to each other and swapped photographs over many years it seems. The photographs and letters have not survived house clearances in Orkney sadly. But my newly-discovered fourth cousin in Australia has shared some wonderful photographs as well as a lot of information. (What’s a fourth cousin? Check foot of page)

This is my favourite photo. It 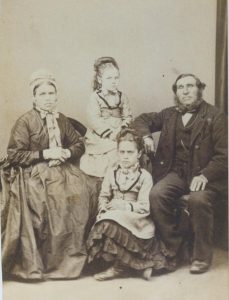 shows my great great grandmother, Barbara Millar Sinclair (1826-1914), my great great grandfather, Nicol Slater (1820-1875) and their two youngest daughters, Catherine, Mrs Andrew Robertson, (1865-1945) and Barbara, Mrs Thomas Clouston, (1869-1961).  It is the first photo of Nicol I have ever seen, so I am thrilled. I have a photo of Barbara, his wife, as an old woman, but what stuns me about this one is that my uncle is so like her. We have always thought that “he takes after his father’s side”. There is no copy in Orkney as far as I know yet the photo sent to Barbara’s sister Jean thousands of miles away in Australia back in the 1870s has been preserved. And it seems there may be another in the USA, probably sent to Nicol Slater’s cousin William Slater who also  immigrated.

So, yes, Ancestry shaky leaf hints can be very worthwhile so long as you and your contact have both done your research well. I’ve been sending photos and other information to Australia too for these things should never be one-way. I am reluctant to share much with people who give little or nothing in return. Generally, I’ve found third, and now, fourth, cousins to be great contacts.