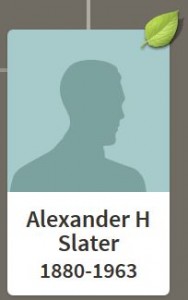 If you have a family tree on Ancestry or use Family Tree Maker, you will have seen the Ancestry shaky leaves. These are hints that there are records or other family trees on Ancestry that could be relevant to your ancestor. But are they helpful? Can you trust them?

Last week, I did a rare check and, to my surprise, found two very useful hints.

One hint referred me to a tree that included my great great grandmother’s sister, Margaret, her husband and daughter. An elderly relative had said that Margaret immigrated to America; this tree said Canada. But birth and marriage dates and places matched, the daughter’s fairly unusual middle name, Leask, was included and a son born after the family left Scotland had a distinctive family name, William Moncrieff. After checking some facts,  I’ve been in contact with the owner of the

tree and am satisfied that we both have the same people. (Of the eight trees in the hint, this was the only match worth investigating.)

Another hint, also from a public tree, took me down a much more surprising route: a x3 great grandfather, born 1800 or earlier, whom I have hardly researched, turned up dead in Australia, as did his daughter, whose name and birth date I knew. Initially, I was very sceptical, the best way to be with these public tree hints, especially as he was also said to have married again. His name, Thomas Sinclair, is not unusual and it is very easy to link the wrong people when you find a name in marriage records. The tree included some Scottish census links which I followed up: both made sense and one probably explains why Thomas’s daughter, my x2 great grandmother, got married where she did. After checking out some online baptism and marriage indexes, the likelihood that this is the right man increased. I now have a tasklist including: check the original baptism, marriage and census records at ScotlandsPeople and National Records of Scotland (some are not from the established Church of Scotland); order a copy of the Australian death registration. Once I have seen those, I hope I will be able to confirm that this is my Thomas Sinclair.

In general, treat Ancestry shaky leaves that lead to other member trees with extreme caution. You need to investigate further, check the original records, not just transcripts or indexes, and verify the information for yourself. Don’t take someone else’s word for it or you could be building shaky foundations for your own tree and adding to the many error-filled trees on Ancestry. This type of hint is not a substitute for your own research. I’m really pleased with my two links from last week but they make sense because I’ve already built a solid foundation.

Once you click on the person, you find out just how many hints  there are.

For Alexander there were three in total, one for member trees and two for records. Shaky leaves linking to actual records on Ancestry are potentially much more accurate, very accurate sometimes but they are only as good as the information you already have in your tree. If that information is wrong, the hints will also be wrong. For Alexander there were two census hints, 1891 and 1881 (below), both spot on.

If I didn’t already know his birth date or his parents’ names this hint could be very useful but I’d then need to check the original birth and census records at ScotlandsPeople. (Some of the original records are on Ancestry so you can investigate straightaway.) The sibling’s name could also help with identification through other records.  Sometimes, it will be very obvious that a record is not relevant, for example if you know for sure that your Alexander Slater was born in Orkney, Scotland in August 1881 but the hint is about a John Harris born in Tredegar, Wales in 1881 then it is unlikely to be the same person.

It’s important to understand too that by no means all of Ancestry’s many record sets/databases are included in the hints. You will have to search them yourself. Ancestry has a good video explaining how to use hints (some comments, on censuses for example, refer to American records rather than UK).

Ancestry shaky leaves – use them carefully, do your own research and they can be a real asset. But check throughly before you attach them to your tree, don’t allow the thrill of discovery to carry you away!