Moncrieff is one of the more unusual surnames in my family tree. Unusual for Orkney that is. The name links to Houton, formerly a small estate in the parish of Orphir, Orkney. Map (name spelled Houston)

I’d never investigated where the Moncrieffs came from but last year I had a client whose ancestry contained a schoolmaster in Orkney. This jogged a memory that I too had a forebear who was a teacher, in the parish of Harray, Orkney. Initial research showed that Alexander Moncrieff, my x6 great grandfather was the first SSPCK (Society in Scotland for Propagating Christian Knowledge) schoolmaster in Harray, working there from 1712 until 1727. One source suggests he may have been of the Culfargie line in Perthshire but, as it does not mention at all that he was a schoolmaster, this may well not be reliable.

As the SSPCK was formed in 1709, he was one of their first teachers so, by good fortune, there is quite a lot about him in a recent Ph.D on the early years of the organisation. When he first applied to work with the Society his arithmetic was not good enough it seems but he put that right. He was a Gaelic speaker and, due to his language skills, the Society wanted to move him to Gairloch in 1714 but he made the case for remaining in Harray. Nonetheless, the Society still gave him the salary supplement for those in Gaelic parishes. An attempt to poach him for a new school in South Ronaldsay was also unsuccessful. From other sources, it appears that he had been to university, possibly St Andrews though this theory needs further research.

Marriage and the link to Houton

On 30 June 1715 Alexander married Katharin Spence in the parish of Birsay but she must have died for on 28 August 1718 he married Christian Halcro of Houton. Christian’s father Robert was dead by this time and her brother Robert, cautioner or guarantor for her marriage, died around 1725 when the estate passed to her. 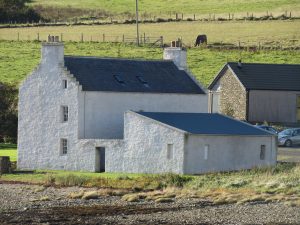 Houth, home of the Moncrieffs of Houton

She died in 1730 leaving Alexander with five children. One son, Robert, became laird of Houton though he was never served heir; Thomas Moncrieff, described as factor of the Houton estate in the baptism record of his son Alexander (Orphir, 1757) was another son. There are no baptism records for Harray before 1766 and though those of Orphir start in 1708, I have not found the other three children so far. Update: there seems to have been a sister Ann. Two to go!

By 1730 Alexander had moved to Raining’s School, Inverness and possibly remained there until 1748. From a 1733 list of SSPCK schools and schoolmasters, he had an assistant there so it the appointment would have been a promotion of sorts. One of my questions is what happened to his children? Did they remain in Orkney? If so, with whom?

So far, apart from OPRs and estate records, I’ve used secondary sources (see below). My next steps are to explore some of the SSPCK records for myself, check Orkney sasines and retours for information on the Halcro to Moncrieff succession, see what else can be found on Alexander’s life before Harray and after Inverness. If he was a teacher by 1712, he is likely to have been born no later than the mid 1690s. His entry in AS Cowper’s very useful book (see below) states that he was “superannuated” so his death would be 1748 or later.

I’ve now written a new blog covering some of the story of Houton and the Moncrieffs.