“That should have been ours”, the usual family refrain as we drove anywhere near Houton in Orphir, Orkney. The tale is strong and persistent: a young woman was tricked into signing away her right to the Houton estate, the story goes. So it fits well with ‘Family legend’ this week’s theme for #52ancestors challenge.

Williamina Moncrieff (1827-1918) a great great grandmother on my maternal grandfather’s side, married John Groundwater and raised a large family at Scorridale, with one of the finest views in Orkney and some of the poorest land. It’s her Moncrieff ancestry that is of interest for they owned the Houton estate from around 1725 until the late 1880s.

Samuel (baptised 1763), Williamina’s grandfather, was the fourth son of Robert senior. Samuel’s second son, William (c1801-1827) was the father of Williamina and her older sister Margaret. On the face of it, Williamina’s line would not have had much of a claim on the estate.  Yet things don’t always work out that way. 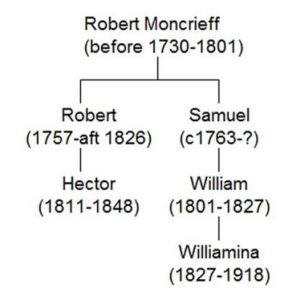 Robert junior (1757-c1821), Samuel’s oldest brother, is the only one of Robert senior’s sons (apart from Samuel) who appears in Orkney marriage and then baptism records. He married quite late in lfe and had one son, Hector (1811-1848). Hector had no legitimate children but at least two illegitimate daughters. So the direct line ended. Samuel’s older son was lost at the whaling, with no known family, while Margaret, older sister of Williamina emigrated to Canada and died young. So actually, Williamina might just have been in with a chance of gaining the estate. Was it her who signed away the inheritance?

I don’t know, I’m still working on it. So far I’ve found no documents which corroborate the family legend.

There is some possible incidental evidence. In the late 1880s and 1890s, and probably earlier, Williamina received an annual payment of £12 from the Houton estate. A pittance really, just enough to cover the rent of Scorridale; meantime her husband, John Groundwater, was often in arrears with that rent. But why did she get this money? Two illegitimate daughters of Hector Moncrieff, Hectorina Moncrieff and Jemima Moncrieff, also received allowances, though in their case I can see why Hector should have felt some responsibility. But Williamina’s case is more puzzling. I’ve not yet found anything about her allowance in Orkney Sheriff Court deeds or elsewhere. Unfortunately Houton estate records don’t appear to have survived for much of the 19th century.

The Sheriff Court records do suggest however that there was no love lost between the Moncrieff descendants. Within weeks of William Moncrieff’s untimely death in 1827, Robert Moncrieff junior, his uncle, forced a roup sale of William’s goods. You can read about this in another blog. Robert claimed that William’s financial affairs were in a mess; from other documents, I suspect the Houton estate was not in great shape either.

What happened to the Houton estate?

After Hector Moncrieff, the last of the direct line, died in 1848, his solicitor registered with Kirkwall Sheriff Court a trust disposition and settlement that Hector had made in September 1841. In it Hector made over all his lands, his estate heritable and moveable, to his wife Isabella (née Sands) in the event of his death. Before 1868, wills could only transfer moveable property (money, personal possessions, furniture etc); heritable property (land and buildings) was inherited either by the retours process or by a trust disposition and settlement (also known as a ‘deed of settlement’).

The trust disposition allowed an individual to make sure that his landed property went to his chosen heirs. When Hector made his disposition, he and Isabella had been married for almost four years and there were no children. So was it an attempt to forestall inheritance by another line? But that still does not explain why some young woman might have signed away her rights.

Isabella, widow of Hector, married again, to Robert Hiddleston, minister of Orphir, another childless marriage. She bequeathed the Houton estate to the Indigent Gentlewomen’s Society when she died in 1889.

What’s for you won’t go by you?

In one of those quirks of history, a x2 and x3 great grandfather on my maternal grandmother’s side bought farms from the Houton estate in the early 1850s. (Kebro was one.) So perhaps my sister and I did, for a time, have a stake in the Houton estate after all.