Sandy Barnett died on 5 April 1941 as a result of an air attack on the SS Rattray Head, eight miles ENE of Aberdeen. The Rattray Head was a 496 ton steam cargo ship on a voyage from Leith, her home port, to Stromness, Orkney.  “Young Sandy”, so called to distinguish him from his father, was a lamp trimmer, that is a member of the deck crew responsible for navigation and other lights. He was 33 and the only son of Sandy and the late Jemima Barnett.

My father had a prodigious memory and knew all about the sinking of the Rattray Head, which would have happened about four months before he was called up. How I wish I could remember all he said.  It seems that as the crew made for their lifeboat the German plane returned and strafed the ship with machine gun fire. Sandy may have gone back to the bridge for something, possibly a knife to cut the lifeboat’s ropes, but at that point he was fatally wounded. Quite unusually for an Orcadian seaman, he was a strong swimmer so could have stood a reasonable chance of survival but for the shooting.

His body washed ashore at Crail, Fife, some way down the east coast of Scotland, and that is where he is buried (scroll down the link page to see his gravestone). He is also named on his parents’ gravestone in Osmondwall Kirkyard, Longhope, Orkney. When my parents visited Crail in the 1950s they met by chance someone who had been at the service when Sandy’s body was buried. Quite a poignant meeting as Sandy was my father’s favourite cousin, though about 14 years older than him. 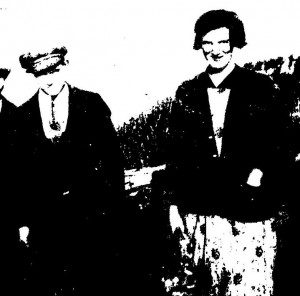 Sandy Barnett and his sister Ellen

I guess it was probably that kind of liking you have for older cousins who are kind and very tolerant despite your youth. I have only been able to find one photo of him, with his sister Ellen whom I remember very well. Unfortunately it is a fairly poor photo.

The captain of SS Rattray Head, a Shetland man, Matthew Leask from Bressay, and the fireman, Charles V Tookey, were also lost. They are among almost 24,000 merchant seamen and fishermen from WW2, many of whom have no grave, commemorated on the Tower Hill Memorial in London. The Rattray Head’s section of the memorial is on this page – you will need to scroll down.

It seems that only those three were lost but I have yet to establish how many other crew there were as I write this, almost 74 years to the day after the event.

For more information on the ship itself and the wreck, see www.wrecksite.eu

Battleships-cruisers.co.uk lists merchant ships and fishing boats lost as a result of enemy action in WW2, three on 5 April 1941 alone.