The Kirk Session of the Presbyterian Church of Scotland played a major role in policing the behaviour of parishioners in past times. Fornicators, adulterers, drunkards, sabbath-breakers, quarrelsome characters and the like (see  Walls Kirk Session records for examples) could be called to account for their behaviour, fined and eventually readmitted to communion. Public rebuke, chiefly for fornicators and adulterers, meant standing outside the kirk door in penitence for several Sundays as the congregation arrived or sitting on the ‘stool of repentance’ during public worship as an object of shame. The Black Stool (also known as Presbyterian Penance)  a painting by David Allen (1744-1796) illustrates this.

Did it work? In 1791 James Scott, minister of Benholm, Kincardineshire, considered that “the rebuking of persons guilty of fornication in public was not only hurtful to the feelings of many of the Hearers; but in his opinion had often been the occasion of child murder and had a tendency to root out the remains of shame in the culprit rather than to deter others from the like fault”.1 The Kirk Session agreed with him and it was decided that “persons guilty of fornication should in future be rebuked only before the Session & pay twenty shillings of penalty… for behalf of the Poor of the Parish”.2  (Scott also stated that the practice was falling into disuse; I’d be interested in examples from other parishes.) Robert Burns’ poem, The Fornicator, provides anecdotal evidence that public shaming was ineffective in amending behaviour.

But the fear of public shaming could lead not only to child murder, as James Scott claimed, but also to suicide. That may be part of the background to Betty Corrigall’s lonely grave, a well-known landmark on the island of Hoy, Orkney. 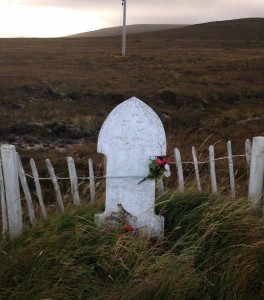 Betty was a young woman, aged 17 or 27, from Little Cletts or Greengears (details vary) in the parish of Walls, Orkney, who found herself pregnant and abandoned by the father who had gone off to sea. After a failed first attempt to take her own life by drowning, she hanged herself, so great was her desperation. As a suicide she could not be buried on consecrated ground so her grave is on the border of the parishes of Walls and Hoy. These events are said to have taken place in the late 1770s. There are no extant Kirk Session or burial records from the parish of Walls at this time but the terrible events were clearly deeply etched in community memory. Betty’s coffin was discovered by peat cutters in the 1930s and eventually, in 1976, a fibreglass gravestone erected. The fuller story is told in many places.3

General disapproval may have been as significant as the fear of public rebuke in poor Betty Corrigall’s case of course.