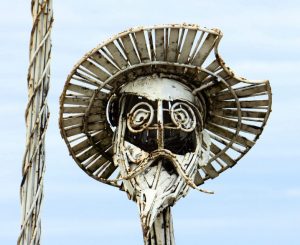 William Moncrieff Groundwater was born on 11 March 1849 in Orphir, Orkney, first child of John Groundwater and Williamina Moncrieff, and died on 16 October 1936 at Cruan Cottage, Firth, Orkney. That seems quite ordinary, but it’s some of his actions and claims that make me want to describe him as “quixotic”.

I’m still researching him but here are a few examples that may justify my description:

Did he even believe all the hype about his age?

Maybe a sad rather than quixotic man by the end of his life as his wife and their three children, Horace, Eliza and William, all died before him.