Here are two Brims memories, recordings of my paternal grandmother, Walterina Nicholson. She was born at Afrigate, Brims, on 9 October 1892 and died in Kirkwall on 31 August 1991.

Granny’s memory was very clear until the last 18 months of her life but I can’t guarantee total accuracy.  Enjoy her Orkney dialect and accent too, though you should be aware that Granny was “chantan” some of the time. This was for radio after all!

She talks to Kathryn Gourlay about the Longhope Lifeboat’s rescue of the Manchester City on 31 October 1898. The lifeboat was the Samyntas Stannah with coxswain Benjamin Stout.  During the interview, she reads a poem about the lifeboatmen written by Captain George Robertson, master of the St Ola.  (You can find a copy of the words, apart from one verse, here.) Granny’s father, James Nicholson, was a member of the first lifeboat crew in 1874. (4 Mb)

(Here’s a link to a photo of the ship and some more local recollections.)

The October when she and her younger brother, Wilson, spotted a German submarine in the Pentland Firth. They reported it to Admiral Colville at Longhope who came up to thank them, giving them a sovereign as a reward. Admiral Sir Stanley Colville moved from the command of Orkney and Shetland to that of Portsmouth in February 1916, so this event must have happened in 1914 or 1915. The lifeboat coxswain whose phone they used would have been John (Jake) Swanson. (1Mb)

I’m grateful to BBC Radio Orkney for permission to use these broadcasts which were probably made in the 1980s. Thanks also to Orkney Library and Archive for rescuing my parents’ recording of the radio programmes from a rather mangled cassette. 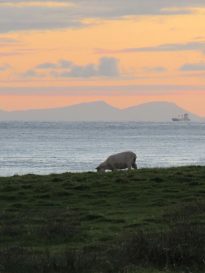