Storms are a fairly common occurrence in Orkney where the majority of my known ancestors lived their lives. I have a newspaper cutting from the mid 1960s with the headline “Five weeks of gales without let up”. Storm is not used so much: “gey windy”, “blowan a gale” or “right coorse” would be more common descriptions. My paternal grandmother knew all about such weather. 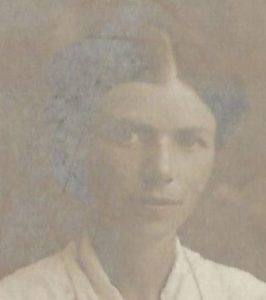 Walterina as a young woman

She was born at Afrigate, Brims in the parish of Walls, Orkney on 9 October 1892 and was also brought up there. She was the third of James Nicolson (1847-1937) and Helen Wilson’s (1853-1938) four children, three girls and a boy. The “h” in Nicholson was very important, she always included it though her ancestors did not!

Afrigate stands on higher land above the settlement of Brims with a view out to the Pentland Firth, one of the roughest stretches of water in the world, on the south side. In his oral evidence to the Crofters Commission (pdf, see p 17) in 1888 her father James stated “I have the worst croft on the estate – from damage from sea-gust and shaking of crops.”

View from Brims over the Pentland Firth to Stroma and Caithness, Scotland, on a fine day

One of granny’s memories was of the rescue of the Manchester City on a “coorse night”, Halloween 1898 when she was just six. You can hear a recording of her talking about it here.

The sea was a constant element of Granny’s long life; she never lived more than half a mile from it. Her father James was a member of the first lifeboat crew in Longhope while her brother Wilson joined later. Their grandfather Ralph was also “about hands”. Samuel Wilson, her maternal grandfather, a shadowy figure at best, was a sailor, never at home at census time.

In 1921 Granny and my grandfather John Ross moved from Afrigate down to Wellbraes in Crockness, North Walls, (map) literally a stone’s throw from the sea.

Though Crockness could be a windy place too, it can’t have been as bad as Afrigate. Number 2 North Ness where they moved in the 1940s was also on the sea, but again facing the rather calmer waters of Longhope. (See map link above for locations.)

As a child I remember her looking out for the mast of the ferry at Scapa from her living room window (this was before the houses in Scapa Court were built for anyone who knows the area).

Living to be nearly 99 is not always a great blessing. Not least when you have been a widow for 40 years, about five years more than you were married, and have lost two sons. 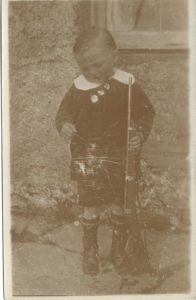 Way back in 1919, a few weeks after Jim, her second son, was born, the oldest son, John, died aged three. The cause of death was post basal meningitis exhaustion. From snippets my sister recalls, John had been in hospital in Kirkwall for at least one period. A relative recalled that my granny was giving birth to Jim in one room at Afrigate while “peedie Johnny” was screaming with head pain in another. Storms of a totally different kind. 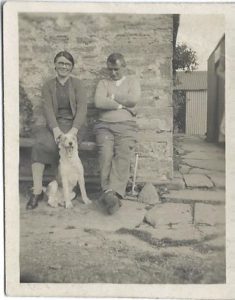 My grandfather John was diagnosed with multiple sclerosis around 1936 and died in 1951, aged 61.

From the little my father said, he had been unwell for sometime before his illness was given a name. At his death there were unrecoverable debts owed to his joinery business.

Less than three years later in 1954, Jim died aged only 34. He too had multiple sclerosis, for approximately 12 years. I can’t begin to imagine what it was like for them as a family, knowing how the condition was likely to develop.

I have a tiny scrap of paper, in granny’s impeccable handwriting, where she noted the death dates of her husband and Jim along with the dates the three boys, Jim, Walter (my father) and Freddie went away after call up in World War 2. 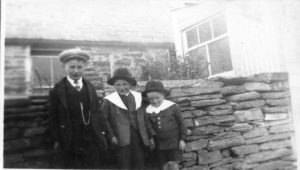 How did she cope with a disabled husband and three sons in the Forces? Jim soon returned as his eyesight was too poor, but even still.

Move to the mainland

In 1955 my parents and granny moved from North Ness to Kirkwall as the doctor felt granny needed a change. The Naval Base at Lyness where my father worked was also closing. For the rest of her life granny lived with us in Kirkwall, in her own rooms. That was stormy at times too. Three generations living together is never easy.

There are good memories, evenings playing Batchie and Sooty Peter with her, quizzes on the capital cities of Europe. Geography was clearly very well taught at the tiny Brims School. And stories. If only there had been more of them or I had a better memory.

She was a very sociable woman, liking to meet other people and have visitors. Old age with fewer and fewer contemporaries was undoubtedly lonely. Granny knitted a lot – but always socks, including a pair for our great local MP Jo Grimond. She even went along with her granddaughters’ request for striped knee socks in the 1970s!

Walterina died at Eastbank Hospital, Kirkwall on 31 August 1991, a few weeks short of her 99th birthday. She is buried at St John’s North Walls, with her husband John and sons John and Jim.

A post for the #52ancestors challenge on the set theme “Storms”