The current school at North Walls is the latest of three in the same area but there was certainly a school or schools in “the Northside” before 1867. Additional information is welcome; this is very much a work in progress.

The General Assembly (GA) School – opened in summer 1867, partly funded by the Church of Scotland, hence the name. It was only transferred to the School Board in 1891, almost 20 years after the Education (Scotland) Act, 1872, which regularised and extended the provision of schools and established elected boards in each area. Known as North Walls Public School from that time. Read more…

North Walls Public School – opened on 25 August 1932 with space for 60 pupils. Additional classroom space, a dining room and kitchen were added and in use shortly after the start of the 1948-49 session. Read more… Now home to the Gable End Theatre.

North Walls Community School – opened in (TBC – still trying to get the date!), complete with swimming pool and healthy living centre. Link to the school website

I’ve started a list of for the North Walls and Brims schools. Names and dates to add would be very welcome. 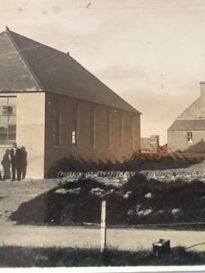