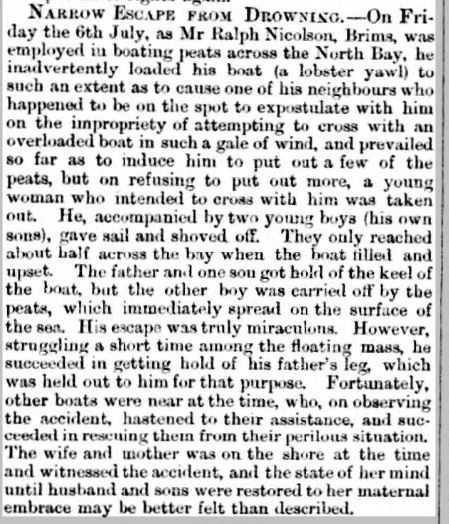 Brims is an area in the parish of Walls, Orkney, part of the island of Hoy. This map shows Brims and the North Bay.

Should have known better?

Born in Brims, Ralph would have grown up on the edge of the Pentland Firth which is one of the most challenging stretches of water in the world. Ralph’s father, James, apparently drowned there while competing with others for the task of piloting a boat through the Firth, a valuable source of income for Brims men. (There’s an article here about the Pentland Firth which describes piloting briefly.)

Ralph was a pilot too. An article in the John O Groat Journal about the Wick (Caithness) regatta described him as “the well known pilot, Ralph Nicolson, Longhope”. (John O Groat Journal 29 June 1887. The Jubilee regatta at Wick.  p 3, col a)  Longhope is another name for Walls, though it really refers to the bay.

He was also helped save the lives of others, information from the John O Groat Journal again. In October 1875, Ralph was one of four men who put out in a small boat when the fishing smack Rapid of Grimsby broke chain in “Edith Hope” [should be Aith Hope] “and at the imminent risk of their lives succeeded in rescuing the shipwrecked crew numbering seven”. The others were lifeboat coxswains Benjamin Stout and William Swanson along wth James Nicolson, Ralph’s son. (John O Groat Journal. 28 October 1875. The storm. p 3, col e) I don’t think Ralph was part of the actual lifeboat crew, first set up in 1874, though James certainly was.

He lived to be 82 and is buried at Ousna with his wife Ellen and some of their children.

Maybe I’m the lucky one?

My great grandfather, James Nicolson (1847-1937) was one of the sons, along with Ralph junior (1849-1877). If he had drowned, I would not be writing this now! The boys were clearly not daunted by the incident for James served as a lifeboatman for many years while Ralph became a master mariner and died in Australia.

(I know this is not a yole but it’s hard to find a suitable image of an overturned boat!)