Many of my direct ancestors had hard lives with deaths at sea, loss of children at a young age, poverty and hardship, but their stories and their lives are known.  Is the greatest misfortune perhaps to be unremembered?

My father knew the names of all his grandfather’s brothers and sisters, married names, where they lived, often far more. But one sister was unknown to him, his great aunt Ann, my great great aunt.

Ann was the ninth child of Hugh Ross (1816-1892) and Ann Thomson (1816-1904). She was born at South Seatter, North Walls, Orkney on 25 July 1856 and her father Hugh, a farmer, registered her birth. South Seatter or Upper House South Seatter is usually known as Upper Seatter now.

I know very little about her life but I can offer a likely picture. Very usefully, her entire family was at home on census night 1861, from her oldest brother, 18 year old Walter, a blacksmith, to her youngest sister, six month old Catharine. Upper House had two rooms with a window so must have been quite crowded with 12 people (one child was stillborn so parents and 10 children).

During her childhood Ann would have had the company of many cousins, at least 15 of them between North Ness, Crockness and Doonatoon. Her Ross grandparents, Walter (1786-1862) and Charlotte (1793-1869), lived at Doonatoon, also known as Doonthro, so were close by too, though the Thomson grandparents were both dead. Ann’s home, Upper House, and all these places are marked on this map.

I can’t say for definite that she went to school but it is very likely, even if only for a short period. (This is before the 1872 Education (Scotland) Act, officially the start of compulsory education.) Two of her brothers, Hugh and James, were described as scholars in the 1861 census as were her two younger siblings, Sam and Kate, in 1871. 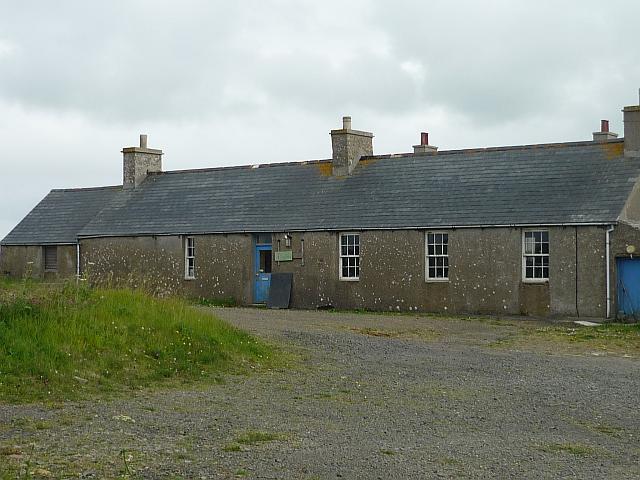 The Northside General Assembly School opened in summer 1867, chiefly funded by the Church of Scotland but also by public subscription, to tackle what was said to be quite poor educational provision. It was about half a mile from her home, so it is possible that she was a pupil there. See map linked above.

By the 1871 census Ann was a 15 year old farm servant living at home with her parents, older brother John and younger siblings Samuel (Sam) and Catharine (Kate) Two older sisters had married. Charlotte, Mrs Robert Dodds, was living in Edinburgh while Janetta, Mrs Charles Sinclair, was in Govan, Glasgow. A third sister, Wilhelmina, was in service in Edinburgh. Her brother Hugh was almost certainly at sea while James may have been in or en route for Australia. Big changes in 10 years.

With few opportunities for young women in rural communities it was hardly surprising that Ann’s sisters moved away and went into domestic service. At some point in the 1870s she joined them.

Then on 4 August 1878, aged only 22, she died at 17 Blackie Street, Anderston, Glasgow, the home of her sister Wilhelmina. David Lennie, her brother-in-law, registered her death. Her occupation was domestic servant.

Like so many in the more densely populated areas of Scotland, Ann died from phthisis, a form of tuberculosis. Of the 76793 deaths registered in Scotland in 1878, tubercular disease was the cause of 12567, with phthisis by far the most common within that category.

I now need to try and locate Ann’s burial place using the Glasgow burial registers. Her name is included on her parents’ gravestone in South Walls which makes it all the more surprising that my father did not know she existed. I hope this blog for the #52ancestors challenge on the theme of misfortune rescues her from the misfortune of being no more than statistic.

Thanks to information from a third cousin, I’ve now discovered that Ann was buried at Craigton Cemetery, Glasgow in the same lair with her 13 month old niece, Marion S Sinclair, daughter of Charles and Janetta. Now to see if there is a gravestone and whether anyone else is in the same lair.