This week’s #52ancestors set topic is “close up”. I’m struggling to find a suitable ancestor but the theme also reflects the difficulty you may encounter when relatives close up and won’t tell. So that is my inspiration!!

Auntie Barbara was my mother’s younger sister, she lived with her parents, James and Jessie, until they died in 1967 and 1970 respectively. Consequently she must have heard family stories, picked up local knowledge as well as being part of my family history herself. 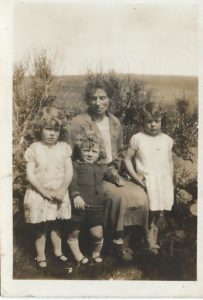 But would she tell? In her younger days, yes there were stories about her childhood and that of her siblings. By the time I was very actively collecting family history and had specific questions, her attitude was, sadly,  I am not interested.

Did I go about asking my questions in the wrong way? Possibly. There is certainly a skill in getting people to talk and I’ve added a few links below that may be helpful. Did she enjoy the power of withholding information? How unlike her own aunts if she did. Or did she disapprove of some of the people or stories and genuinely feel they were best forgotten? That is a common reason for not telling. We had and have no way of knowing.

There is a lot I could say about Auntie Barbara but in deference to her apparent distaste for family history, just four things. She was born at Hogarth, Rendall, died in Kirkwall having lived her entire life in Orkney, and was widowed twice. Bare bones rather than rich flesh.