This week’s topic for the 52 ancestors challenge is strong woman. There’s quite a lot of choice among my ancestors but I’ve picked Auntie Violet, actually my grand aunt, sister of my grandmother Jessie. Unlike all the ancestors I’ve written about so far, I knew her and this blog includes my recollections as well as those of my mother, her niece.

Violet was born at Kebro, Orphir, Orkney on 1 June 1898, a few minutes after her twin, Lilly. She was the ninth child in a family of eleven. Elizabeth (Lil) Brown, their cousin, had to choose one as a “name daughter” and was advised “Don’t choose the peedie ane (little one), sheu’ll no live”. A serious under estimation of the feisty Violet, though Lilly did outlive her by three weeks. 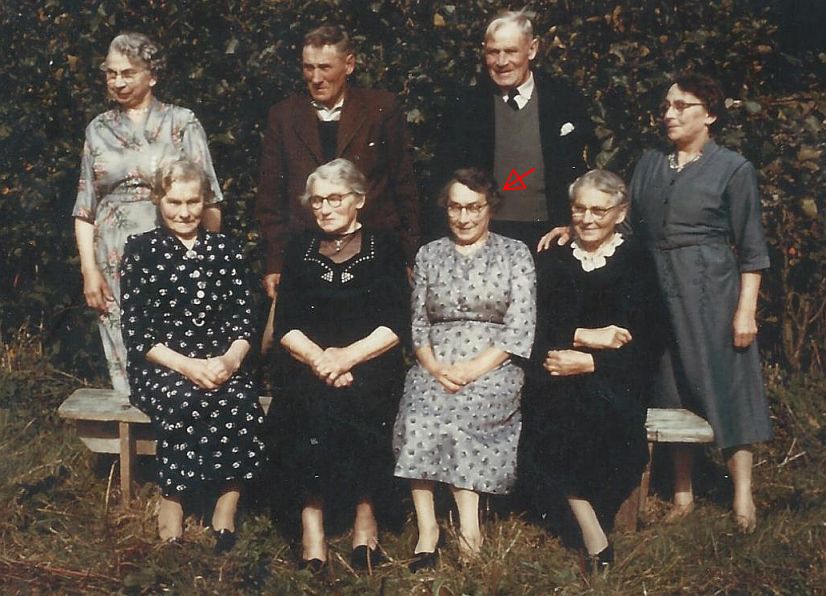 Auntie Violet never married, she lived most of her long life at Kebro and never set foot outside Orkney. In fact, I don’t think she ever travelled farther than the Orkney mainland. Small in stature at around five feet, she was a powerhouse.

With Lilly, she looked after their mother, Jessie Linklater (1861-1929), their father James S Sclater (1857-1941) and then their uncle John Sclater (1863-1953) as well as their youngest brother Sinclair (1904-1960) who had Down’s Syndrome. That was in addition to working on the farm. Nothing very remarkable there perhaps, just the common lot of many an unmarried daughter. Violet was engaged at one time but never married, possibly held back by responsibilities at home.

James, Violet’s father, rented the nearby farm of Groundwater from the Smoogro estate and some of the family, including my grandmother Jessie and Violet, lived there and ran it. When the oldest brother James married, he needed a home of his own so took over a house there. Or at least part of it, for in Violet’s words, “We had to have somewhere to keep the tatties!” (Story from my uncle.)

After their father died, Violet and her sister Lilly took on the farm at Kebro, assisted by Willie Sinclair, the servant man or farm servant.  Life was not always easy for him, he came close to leaving more than once as he told my mother. He would be asked “Willie, get some water…  immediately”.  Nonetheless, he worked at Kebro for over 40 years continuing to live there until shortly before he died. 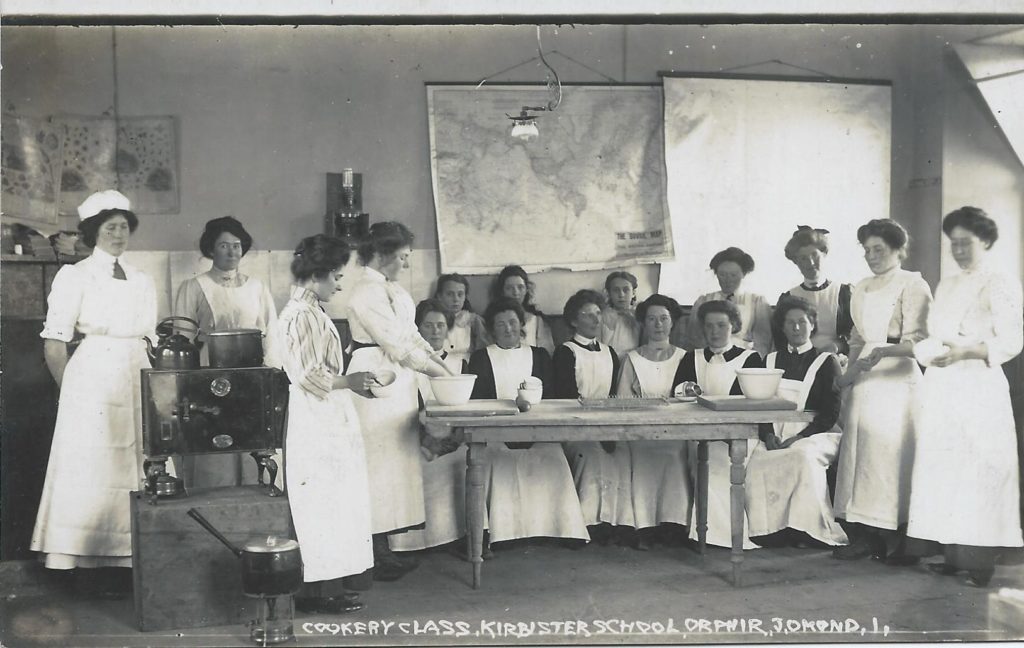 Cookery class, Kirbister School, Orphir c1912. Violet is 5th from right, back row, underneath the map

Auntie Violet and auntie Lilly baked, brewed ale, made wonderful butter and cheese, worked on the farm, dealt with sheep, cattle and hens. I can still see the names of the cattle chalked on the wall above the stalls in the new byre, built with grant aid in the 1960s. 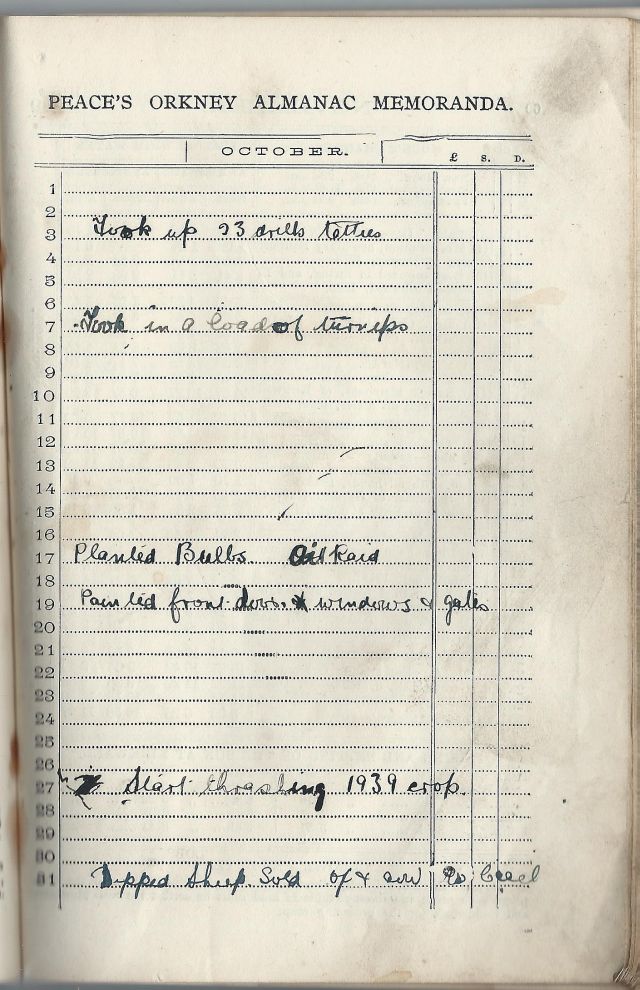 When the farm of Oback came up for sale, Lilly and Violet bought it to avoid bad neighbours, as they shared an access road. “We bought it with our own money that we saved up”, they impressed on me as child, presumably to spur me to similar efforts. For the time, 1946, it was fairly enterprising for single women but they were strivers.

“Never walk if you can run” was another watchword. But they were far from spartan, liking stylish clothes and being in fashion. New houses “with big windows”, so different from their own home, were greatly admired. 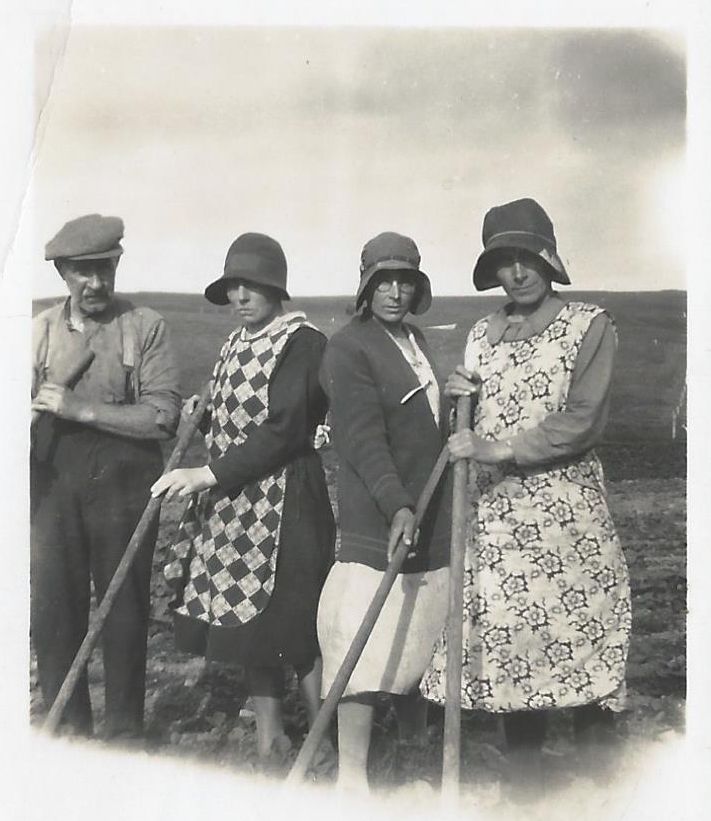 Stubborn, bossy, pernickety about doing the right thing in the right way, usually her way, Violet might disagree with Lilly but woe betide anyone else who disagreed with them. Auntie Violet was also someone who always had time for her many nieces, nephews, grand nieces, grand nephews, not least children, and a large extended family. Hospitality and generosity were second nature and she was great fun, with an ability to laugh at herself.

Running rather than walking carried risks. My mother and father went to visit one stormy night when Violet and Lilly were in their very late 70s or early 80s. Unusually the outside light was not switched on as soon as the car drew up. Because of the weather, the two sisters had assumed there would be no visitors that night so had been “scooran” (cleaning) cutlery and washing the (stone) floor of their living room. Panic ensued at the sound of a car.

I can hear the shrieks of Auntie Violet as I write: “Gooood, hid’s visitors Lilly”. The mop and bucket were stowed in the passage to “ben” (the best room) but one sister, speeding to put something else away, ran into the corridor and kicked over the bucket!! My mother spent the first part of the visit clearing up the water. And no doubt all four sat down to a good supper with home baking.

Actually, this is as much about Lilly as Violet as in many ways they were inseparable. Both were strong women, though Lily was more gentle and rather more adventurous. They spent their last years in St Peter’s House, the Eventide Home, in Stromness, sharing a bedroom as they had done for their entire lives. Auntie Violet died on 15 April 1991 followed, mercifully, by Auntie Lilly on 4 May the same year.