Let me set the scene. I knew from my great aunts that their uncle Peter (my x2 great uncle) had gone to Dakota, married an American called Olivia and had an adopted daughter Maimie. Years later when I seriously got into family history I found that he was born on 9 August 1851, was a tailor in the 1871 Scottish census, living at home in Orphir, Orkney, and, from a sasine regarding the family farm, Peter Heddle Sclater was living in Pembina, North Dakota in 1920. Could I find out more about him?

Homing in on Peter, I found this record in the 1900 US Federal census, in Carlisle, Pembina County, North Dakota.

Wrong first name, James not Peter, wrong birth year (1859 not 1851) but right month, August, born in the right country (Scotland), wrong occupation (farmer not tailor but he was a farmer’s son);  wife’s name nearly matched (Olive not Olivia); adopted daughter, name Mary so again a near match; adopted son – didn’t know about him. So was this Peter? What did other censuses say?

1910 US Federal census; James Slater, now a widower, still in Carlisle, Pembina, North Dakota, aged 52. Wrong name and still too young. But there was this scrawl:

Going on the censuses alone, the evidence is inconclusive. This man was James and a good few years younger, consistently; Slater is not all that uncommon a surname in Scotland. But Olive and Maimie matched pretty well and they lived in the right county in North Dakota. Too much of a coincidence?

I thought it was and so persisted in trying to identify this man and his family. Finding the 1894 marriage of James P Slater and Olivia Basken in Minnedosa, Manitoba, Canada, in the Manitoba Marriage Index on Ancestry was potentially a breakthrough.  So I ordered a copy of of the actual marriage registration from the Manitoba Vital Statistics Agency. When it eventually arrived, it confirmed that James P Slater, 35, residing in Pembina, Dakota, USA, was the son of Nicol and Barbara Slater. Those were the correct parents though Peter was really 42 by late 1894. (And no, he could not have been a brother as I can account for them all, including my great grandfather who was James.)  Subsequent documents have shown that he was known as James P Slater or Peter James Slater in the States and his year of birth was something of a moveable feast.

What’s the moral of this tale?

There’s a few. Be prepared to use a variety of sources and crosscheck;  don’t take things at face-value; new online sources can make a difference too though I know that many many sources are not online at all. And, like Robert the Bruce and the spider, don’t give up. The web may eventually close on that elusive ancestor. 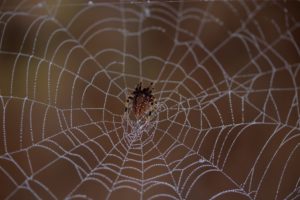