Uncle Sinclair was my maternal grandma Jessie’s youngest sibling. I’ve chosen him as he fits this week’s prompt from #52 ancestors, ‘Youngest’, and also because he had Down’s Syndrome, so he provides an interesting comparison with Mary Ann Ross from last week.

In contrast to Mary Ann, I know quite a lot about Uncle Sinclair and have some photos. (He was actually my grand-uncle but, for some reason, we always referred to my mother’s aunts and uncles in that way, never grand-auntie or uncle.)

Sinclair was the youngest of James S Sclater (1857-1841) and Jessie Linklater’s (1861-1929) eleven children, all of whom survived to adulthood. Sinclair was born at Kebro, Orphir, on  26 January 1904 and died there on 18 June 1960. The cause of death was  cerebral haemorrhage, mongolism. That last word is very jarring but that is how Down’s  used to be known. The condition was first recognised in 1866 but it was 1965 before the rather racist ‘Mongolism’ was dropped as the preferred term. The extra chromosome which causes the condition was discovered in 1959.

As a child I remember being told that he had meningitis when he was a baby but, looking at family photos, it is quite clear that he had Down’s. The 1911 census describes him as “feeble-minded from infancy”. Not good, but better than ‘imbecile’ (see last week’s blog). 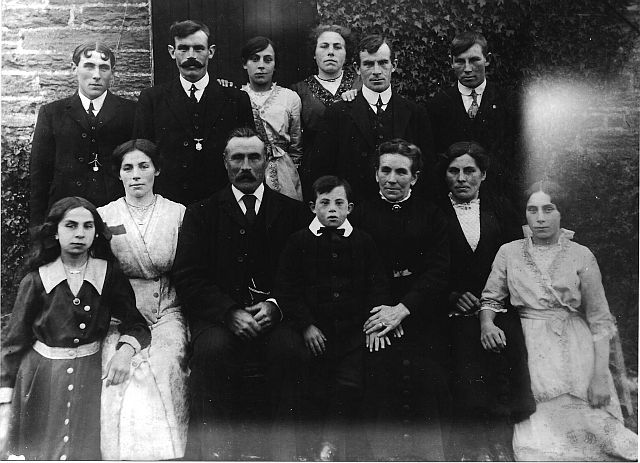 Sinclair’s teeth never grew in and he could not speak very well, though his older sister, Auntie Violet, understood him well. She was mainly in charge of him; a kind of in-house occupational therapist.

Among his tasks was collecting water from the well, wearing a yoke as was common in those days to carry two pails of water at once. His father would also set him to pushing grandchildren on a swing in the barn. Sinclair’s fingers appear to have been quite hard for one nephew, Fraser, said “He has thimmels (thimbles) on the ends o’ his fingers”. He was also be responsible for taking my mother and siblings down to visit cousins at the Scows, a small farm around a mile from Kebro.

My mother recalls that Sinclair was “quite able” though he never went to school which was common for children like him in those days. He was very fond of music and operated his gramaphone with ease. However, one Sunday, he selected the wrong record and put on a song rather than a hymn. A terrible sin in a sabbatarian household! He apparently looked very embarrrassed and changed it quickly.

At that time, there was limited understanding of people with additional support needs and they might be hidden away, leading often to ridicule or fear upon meeting. From all my mother says, uncle Sinclair was very much part of the family. At least one visiting child, however. was afraid of this toothless man who could not speak properly. And so his sister would send him “tae the chaamer tae sprain tatties” while they were there.*

The distinction between mental health (‘lunatic’ in the language of the censuses) and people with a learning disability (‘imbecile’ or ‘feeble-minded’ in the census) was cloudy. Better-off families might send a child to an asylum privately. For poor families additional support needs could be too much, so the poorhouse was the only option for the child.

Unlike Mary Ann (see previous blog), Sinclair was in no way hidden. To be fair, my father talked much less about his family than my mother does and the extended family was far smaller in his case so I have far fewer sources.

Place in the family probably also made a difference. As the youngest, rather than the oldest, there were plenty of siblings to care for him. His father, my great grandfather, made special provision in his will for Sinclair. He gave the four then unmarried daughters the farm at Kebro so long as they provided a home there for Sinclair for the rest of this life.

Mary Ann was born in 1887, Sinclair in 1904, but I don’t know if those 17 years had seen any advance in the care of people with additional support needs.

(This is a very very general overview, I am aware there is much more that could be said.)

*Chaamer – see entry 3 Dictionary of the Scots Language; Sprain – to take the new sprouts/growth off old potatoes. The sprains are poisonous. A tedious task often given to children on a farm.