Taxes, not the most immediately appealing topic for the #52ancestors challenge but it is a challenge after all so here goes. I’m looking at William Sinclair (c1770?-aft 2 Jun 1841?), one of my maternal x4 great grandfathers.

He lived in Stronsay, Orkney, was married to Barbara Miller and they had at least five children: Isabella (Mrs Richard Taylor), Barbara (Mrs Magnus Heddle), Thomas (my x3 great grandfather), Peter and James. That much is certain.

Among the few other definite things I currently know about William is that in February 1824 he was described as “tacksman of Cleat, Stronsay”.  The source is the the testament of John Miller.

This is nothing to do with taxes actually for a tacksman was a tenant who leased property from an owner, on a lease or tack.  William seems to have been more than the average small farmer going by evidence in the amendments that Elizabeth, widow of John Miller, made to his settlement. John bequeathed the annual interest on £800 to Willliam, after Elizabeth’s death,  but she revoked this in 1834 as William owed her just over £588, a considerable sum of money.

The ScotlandsPlaces website has a good collection of tax records mainly from the 18th century. As frequently happens not all records have survived, some of the Orkney records are missing, and not everyone was taxed anyway. For example, window taxes applied only to those with at least ten windows initially, later reducing to seven, so none of my ancestors. But in the 1797-1798 farm horse tax rolls, there is a William Sinclair at both Cleatt (13 horses, 2 liable for tax) and Holland (16 horses, 9 liable for tax), Stronsay.  (There’s an 1820s map here – maps are invaluable for family history.) Are they the same man and is one or both my ancestor?

Right name, right period, right area of the island of Stronsay and right conditions for jumping to unjustified conclusions! Are there any other details for William?

He may be the son of William Sinclair and Isobel Swanny,  born 16 April 1767 and baptised 23 May.  For the end of his life, he may be the 70 year old William Sinclair recorded at Housebay, Stronsay in the 1841 census. There are unfortunately no marriage records for Stronsay before 1801, a gap in baptism records between 1770 and 1797 and very brief burial records, 1801-1854. Hence the mights and maybes.

Back to our Farm Horse Tax, is it our William or not? What’s the evidence for and against?

William and his wife Barbara joined the Associate Session Church, Stronsay, in 1801 and the members’ list tells me they lived at Ervaquey. This was also their address when the two youngest children, Peter and James, were baptised in 1802 and 1805. Thanks to the excellent map of Stronsay field names in the Stronsay Heritage Centre, I know that Ervaquey or Arvoquoy is a field very close to the farm steading at Holland. The names of small long-gone farms are often preserved in fieldnames. 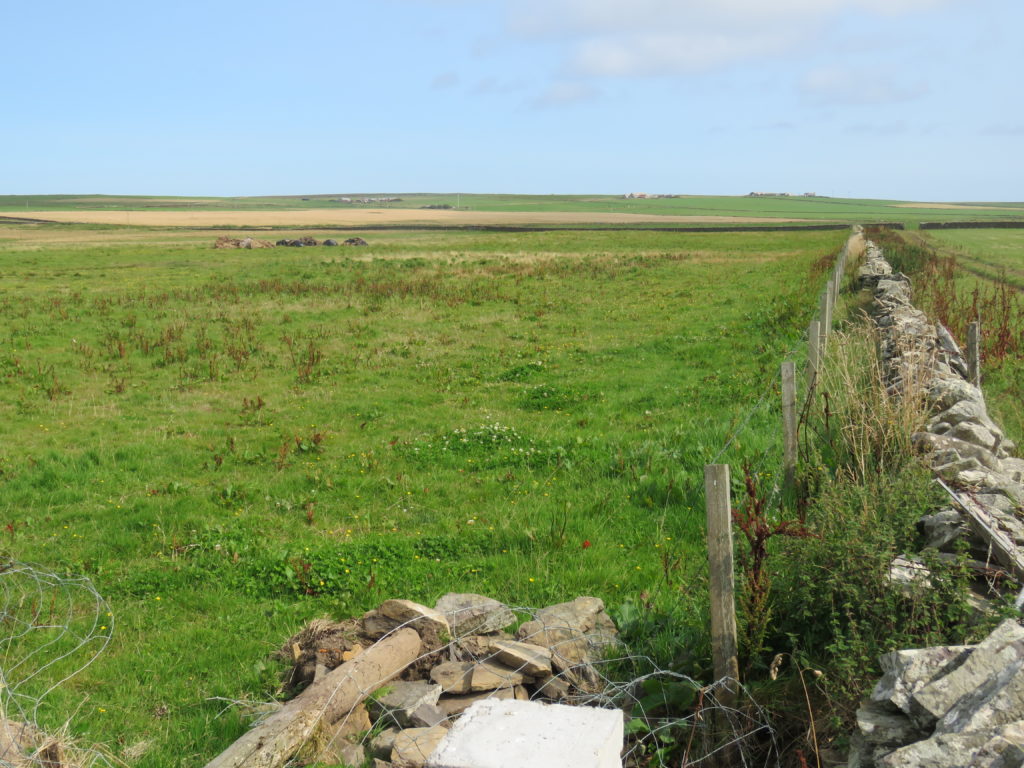 This Arvoquoy family’s names agree with relationships described in John Miller’s very useful testament so I am sure this is the right people.  Records for the Associate Session Church begin around 1800 so the older siblings are not recorded.

William is very clearly described as tacksman of Cleat in John Miller’s 1824 testament. Though it’s a secondary source, he family gravestone of Barbara Heddle (née Sinclair) includes her brother Peter (died 1825) describing him as “son of William Sinclair “farmer, Cleat, Stronsay”. He could have moved there after his children were baptised with the William of the 1797-1798 tax record his father? A possible theory to work on.

In the 1851 and 1861 censuses, William’s son James was the farmer at Holland, employing 22 labourers in 1851.  Could there have been a longer term family connection?

So as you see, there is work to be done. Writing this blog has got me back on William’s trail which is no bad thing.