Military is the theme for #52ancestors challenge this week. As I’ve already written about my mother’s uncle Victor who died in World War 1, I’m turning my attention to my father’s uncle this time. 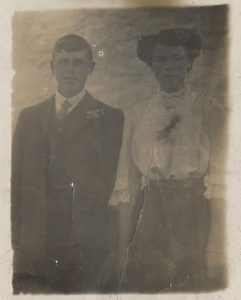 He was born on 26 October 1896, at Afrigate, Brims, in the island of Hoy, Orkney.   As the youngest of James Nicholson and Helen Wilson’s four children, and the only boy, much was made of him. My paternal grandmother, Walterina, was his older sibling. (You can read more about them here.)

As I started writing, I realised how little I actually know about Wilson’s war service therefore this is a rather a patchwork piece. As is the case for many WW1 soldiers, no service record seems to have survived. The two medal records are contradictory with one saying he was a private and the other a lance corporal. (Photo in uniform to follow!)

Service in the Seaforths

Like many men from Orkney he was in the Seaforth Highlanders, a conscript as far as I know. After training at Cromarty (north of Inverness), he went to France with the 8th Battalion. He spent some time in hospital, possibly with a shrapnel wound to his leg. He was also gassed at some point. Both fairly typical experiences.

The most valuable thing I do have is this brief recording of him talking about two of his war time experiences: his 21st birthday and his escape from a German soldier. On his return to the British line after his escape, he called out “Seaforth Highlander, don’t shoot”. Hence my title.

At the time of the recording, Wilson would have been in his 80s and he made few concessions to “proper English”. (mp3 file 4 minutes)

From the 8th Battalion’s war diary, he would have spent his 21st birthday,  26 October 1917, in D Area Arras, on cleaning up and re-organisation. The weather was bad.

Rest of his life

After WW1, Wilson spent the rest of his life in Brims, mainly at Mucklehouse, where he was a crofter and fisherman, taking life in a somewhat relaxed way. Like his father and his son, Wilson was a member of the Longhope Lifeboat crew. He’s the crewman third from the left, back row, in this photo.

(I’m grateful to BBC Radio Orkney for permission to use this recording which was probably made in the 1980s. Thanks also to Orkney Library and Archive who rescued my parents’ recording of the radio programme from a rather mangled cassette.)