Some weeks ago I wrote about Jemima Ross who died at sea between Sri Lanka and St Helena after giving birth to a son James. This week, he is my focus, under the #52 ancestors theme “So very far away”.

His father George S Bruce was a master mariner and his mother Jemima was sailing with him when James was born in 1866. Both were from North Walls in the island of Hoy, Orkney. The 1871 census told me that James was born in Colombo, Ceylon, now Sri Lanka, but I had not so far found a birth registration.

It’s a long time since I last ran searches for James’ birth record but working on his mother inspired me to start again. New sources become available online and my knowledge of his wider family has increased too. An entry in the GRO Marine Births index for “James Abran Fernends Bruce” [sic] drew my attention as I now know that he had an uncle Abram Bruce, also a master mariner. (This index is available through FindMyPast UK.) So, I ordered a copy of the actual birth registration.

The record states that James Abram Fernando Bruce was born on 13 May 1866, Colombo Roads, Island of Ceylon, on board the “Charlotte Ann” of London. His parents were, as I hoped, George S Bruce and Jemima Ross. The birth was entered in the log of the ship on 14 May 1866 and his father made the entry for the Marine Births register on 6 January 1870. George was captain of the Alumina at that time.

I’m intrigued by the middle name Fernando. Perhaps connected with someone on board ship who took charge of the motherless newborn? 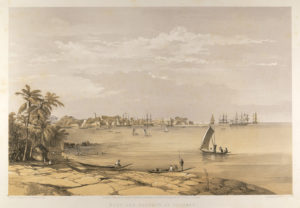 Despite the odds, James survived and, with his brother Benjamin, appeared in the 1871 census at the home of his maternal grandfather James Ross, North Ness, North Walls, Orkney. How did young James get there? Did his father George take him north from London or was that task entrusted to one of the Orkney community in Wapping, the London docks area? George was back at sea by autumn 1866 at any rate.

Grandfather James, a merchant and pilot, drowned on 2 February  1876, crossing from South to North Ness, Walls, Orkney. This probably meant a big change for young James. At this point he still had a maternal uncle, Donald Ross, a paternal uncle and aunt, John Bruce and Susanna (Mrs Walter Ross) and their families in Walls, as well as wider family. However, more loss was to follow for on 28 September 1878, James’ father George drowned in Iquique, Peru (now part of Chile) when a small boat capsized.

I wonder how much James saw of his sea-faring father? George  remarried on 10 December 1870 in Edinburgh, to Ann Malcolmson from the Crockness area of North Walls. She was with her mother in Crockness in the 1871 census but they had both moved to Kirkdale, Liverpool by the 1881 census. There were four children that I know of, the oldest Ann or Annie born in Orkney in 1871, the others (George, Malcolm and Ellen) in Liverpool from 1873. I’ve not found any evidence, so far, that James lived with his stepmother and half-siblings.

At some point, he went to live with his maternal aunt Elizabeth in Wick, Caithness. He is recorded with her and her husband George Sinclair in the 1881 census. The Sinclairs ran a ship chandler’s business and had no family of their own at this point.

The next sighting of James is, predictably perhaps, as an able seaman on the crew of the Falls of Dee which arrived in Sydney, New South Wales, from Glasgow on 15 June 1889. He is listed as JAF Bruce, with nation “Caithness”. The distinctive set of initials surely confirm this is him. (Source: New South Wales, Australia, Unassisted Immigrant Passenger Lists, 1826-1922, www.ancestry.com) The master was a George T Seator, probably an Orkney man or someone with Orkney roots given his surname.

Like both his mother and his father, James died at sea. He was an able seaman on the Glenfinart of Glasgow which went missing on a voyage to San Francisco with a cargo of coal. After leaving Glasgow on 2 August 1890, the vessel was last spoken with on 27 September 1890. Her position at that time was Lat 41 South. Long 54 West, so in the south Atlantic, off the coast of Argentina. Lloyds Register posted the ship missing on 15 April 1891. (Source: Aberdeen Press and Journal, 16 April 1891. Shipping intelligence. p 3 col e. British Newspaper Collection. www.findmypast.co.uk )

His death is in the Marine Register at ScotlandsPeople along with others of the crew. The last abode of Jas AF Bruce, as he is recorded, was 24 Harbour Quay, Greenock, and his nationality, Caithness.

I was actually really disappointed to find his death at such a young age as I had hoped that he might have lived to have a happy family life. On the other hand, I’m pleased to have solved one mystery.

Read my other 52 ancestor posts here.