“A considerable degree of acuteness and shrewdness is observed among the population”, wrote the Rev Peter Jolly in 1840, describing his flock in the parish of Canisbay, Caithness. Walter Ross, my x 3 grandfather, had lately been one of them.

He was born on 17 August 1786, the son of Hugh Rosie and Katharine Sinclair, in Stroma, the island between Caithness and Orkney, part of the parish of Canisbay, Caithness. He married Charlotte Green before 31 July 1816; the marriage record has not survived but their first known child, Hugh, was a “lawful son” when he was baptised on that day. Lawful means not illegitimate or “natural son”. From the baptism of his fourth child onwards, the surname Ross rather than Rosie was used, though there were lapses in other records. Is it significant? I don’t know and it’s often wrong to get too hung up on name variations. Anyway, Walter died on 6 June 1862 in Walls, Orkney.

At some point in the late 1830s, the family moved to Walls, Orkney, The last sighting of Walter Rosie is in the Canisbay Church of Scotland Male Heads of Families roll for 1838 which describes him as a tenant in Stroma (Canisbay Kirk Session Records, CH2/52/4, National Records of Scotland). This is a few years after the baptism of his daughter Charlotte, which took place at Canisbay on 4 May 1833. There is a younger child, John, for whom there is no baptism record in Canisbay and, unfortunately, not one in Walls either. However, the censuses consistently record John’s birthplace as Walls, in contrast to the rest of the family. From them and other sources, his birth year is around 1838.

Why would they have moved from Stroma to Walls? The New Statistical Account for the parish of Canisbay provides one explanation. The parish minister, the Rev Peter Jolly, whom I quoted earlier, wrote in October 1840: “were it not for the excessively high rents… [the people] would be content with their situation and circumstances” (Vol 15 p 27). He later describes how payments in kind had been converted into money payments: “this has proved virtually a very great raising of rent” (p 28). So pressure of rent increases was one driver. But there may be another. Peter Jolly also wrote:

So, in the late 1830s, exactly when Walter and family left, there was a very real attempt to stamp, out smuggling. The comments of the 1841 census enumerator for Stroma fill out the picture some more.

“There is a considerable decrease in this District, the Inhabitants being at and previous to 1831 much addicted to Smuggling. But now Smuggling being completely suppressed several Families have left the Island and moved to the Orkneys to follow more lawfull pursuits”1

For the time being, that is as close to actual evidence for Walter’s involvement in smuggling as I have. Smuggling can refer to the trafficking of goods without paying customs but also to the making of illicit whisky. See Smugglers’ Britain for brief information on this topic.2 The 1822 Illicit Distillation (Scotland) Act and the 1823 Excise Act both had considerable impact on this smuggling, with the latter significantly reducing the duty on whisky. Suppression seems to have come late to Stroma however. Three “preventive service” men are listed in the Male Heads of Families in 1838 and 1839, but only one in 1840 and none in 1841.

Walter and his family settled at Downatown, known locally as Doonthro, one of the larger farms in North Walls. The remains of the house and steading show that, for its time, it was quite a substantial place. But did he follow “more lawfull pursuits”? 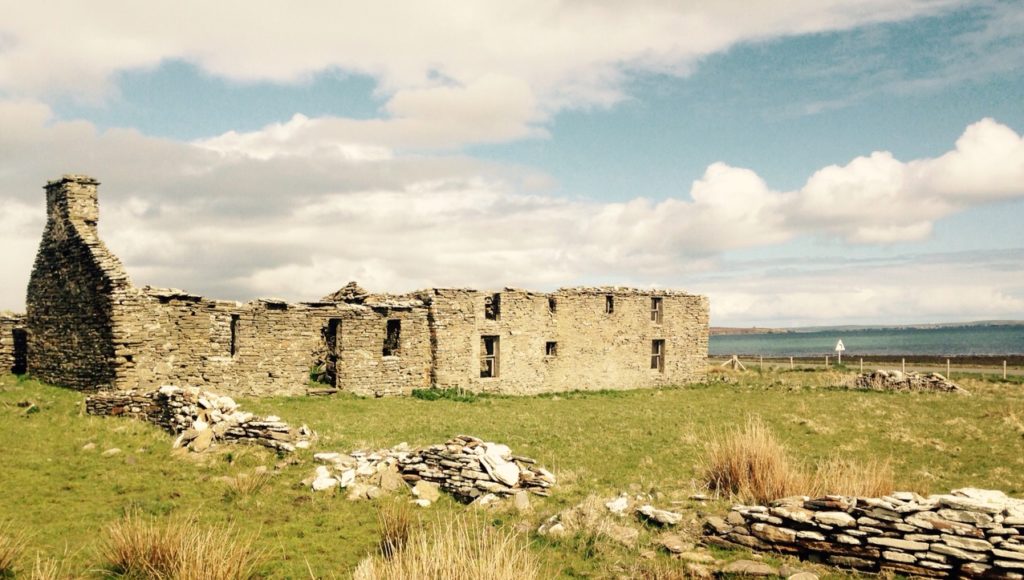 Doonthro was also an inn, or a “shebeen”, as one older resident described it to my parents. Its position, very close to the shores of Longhope, a busy anchorage for shipping heading round the north of Scotland, was an ideal place for such an operation. If Walter had been running a whisky business in Stroma, a farm and inn would have been a good prospect for him.

When we visited Stroma in 2003, the owner’s son recalled a tale about a man of the surname Rosie who had fallen foul of the excise men who confiscated three stills. Unknown to them however, a stack of bere (form of barley) concealed another still which he too away with him. “It’s the whisky that took me down and it’s the whisky that’ll take me back up”, he reportedly said. Stories, yes but some of the framework of facts round about lend credence. More research needed.

The pot of gold

According to my father, there was a pot of gold buried at Doonthro and never found again. People assumed this was money.  Is it perhaps more logical to think of the gold as liquid, uisge beatha?

“Walter Rossie who belonged to Stroma, happened to be at Flotta [the neighbouring island to Walls], when he was captured by the press-gang. He was a strong, healthy-looking man, and was considered by his acquaintances to be very clever. When he was put on board ship he at once began to play the fool. Every means that could be thought of was used for the purpose of trying to get Rossie to commit himself, without avail. At last the captain of the vessel took him in hand. He handed Rossie a silver coin and asked him what he would do with it. The malingerer took the coin in his hand, turned it carefully over, and then declared it would make a fine “henching” stone. Pitching it flat side on the water, he clapped his hands and gleefully chuckled as he saw it bounding out of the water once or twice before it finally disappeared. That was enough for the captain. He ordered Rossie to be put ashore at once as a hopeless fool.”

(Mackintosh, WR (compiler) (1938) Around the Orkney peat fires 4th ed. 1938 Kirkwall: The Orcadian. pp180-181). Though these tales are by no means serious historical work, they first appeared in the Orcadian newspaper around the 1890s, within and the first edition was published in 1894, so within one or two generations of actual events.

Looking at the book now I note several things. Rossie (the Rosie/Ross switch?); Walter, a relatively unusual name but strong in that line; Stroma. If we look at the Canisbay baptism registers, there are only two likely Walters, that is two young-ish men around 1800 or so during the Napoleonic wars. One was born in 1775 and my Walter in 1786. I’ve not been able to completely rule out the other yet.

Also, I noticed that someone had very carefully and neatly removed the ‘ie’ on the end of the first Rossie in my copy, so Walter Rossie becomes Walter Ross. Who made the change? According to the piece of paper glued inside the cover, my father, another Walter Ross, acquired the book in 1950, 12 years after publication. Who had it before him? Should I try unsticking the label to see if there is a name?

Someone, somewhere in my Ross line erased that ‘ie’, I feel sure, not least because a very similar story is a faint family memory. In this version, Walter chuckled over the fine “pleenk” the coin made when it hit the water.

A grain of truth?

Fact and fiction, family stories and documentary evidence, what we want the truth to be and what it really is. Few family stories are totally without foundations. It’s simply that the walls erected on them are often over-elaborated, gaining embellishments as the years go on. I do not doubt that Walter, my x3 grandfather, may well have tried his hand at the whisky. He would also have been a great catch for the press-gang, with the innate sea knowledge of the Stroma men.

“Naughty” was the theme for #52ancestors challenge this week. Walter came to mind immediately, though I much prefer the Rev Peter Jolly’s “acuteness and shrewdness”.

1 I am very grateful to Barbara Stirling, a New Zealander with Stroma roots, for pointing me to this quote many years ago. Not all censuses have enumerators’ comments, but it is worth checking just in case.  Comments are on the last page of each enumerator’s book in 1841 so the only option is to keep going forward a page on ScotlandsPeople. Very easy, and free, if you are using an old census film of course. For the 1851 census, use the “Header” option on the ScotlandsPeople website for the first pages.