Keep reading! They are far more than numbers.

The Statistical Accounts are two fascinating sets of reports on each Scottish parish in the 1790s and the 1830s/40s.  They cover economic and social activities as well as natural resources.

Sir John Sinclair of Ulbster sent out 171 queries to the ministers of each of the 938 parishes in Scotland in the 1790s. Their responses form the Old Statistical Account (OSA). In 1832, because of all the changes that had taken place in Scotland, a new survey was agreed. The responses are collectively known as the New Statistical Account (NSA). Find out more about the background.

How are the Statistical Accounts useful for family history? 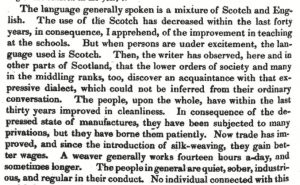 Topography, geology, botany, agriculture, weather, population statistics,diseases, the state of the church and manse, manufactures, occupations (see Inverness, OSA p 622 for a good table), wages, prisons, schools, language,history, antiquities, communications – and much more. Each account as individual as the minister who wrote it. You can find them all on on the Statistical Accounts of Scotland website. Free, with additional features available by subscription.