The farm of Kebro stands on a rise at the head of the Germiston road, with an uninterrupted view down over the Kirbister loch and out to Scapa Flow. It is about 350m off the main road, in the parish of Orphir, Orkney, very close to the border with Stenness. 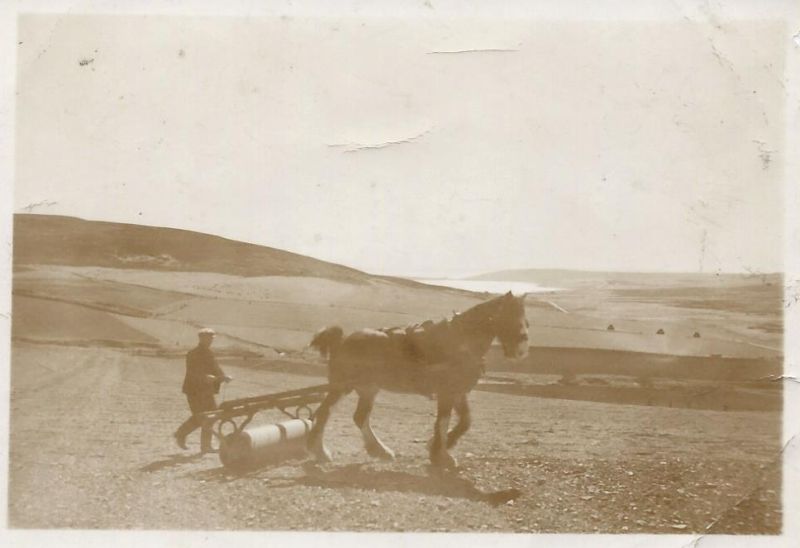 A place for people

Old homestead, this week’s #52ancestors topic, does not do it justice for Kebro was the living heart of my maternal grandmother Jessie Sclater’s large extended family. That was so from my mother’s early childhood in the late 1920s and probably earlier too.

This photo sums up Kebro for me. 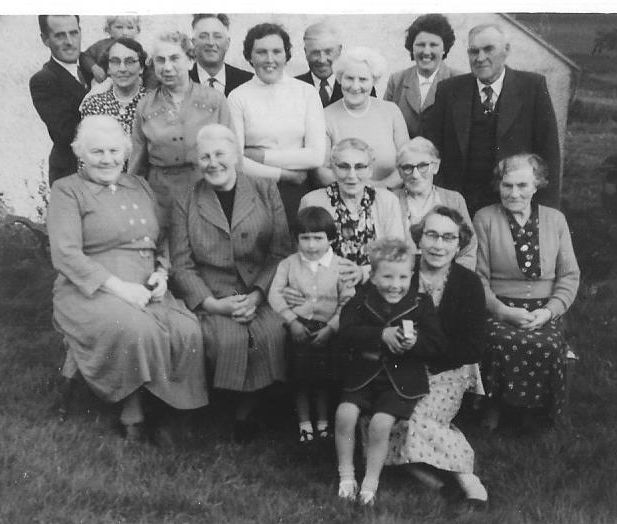 The photo is from summer 1960 when my grand aunt Mary Jean and her husband William Dickson were home from New Zealand, their first visit since 1921. As well as the six Sclater sisters it includes three generations of immediate family and cousins from both sides: Barbara Jean and Annie from the Sclater line and Dave Brown and just possibly Elsie Gaudie from their mother’s Linklater line. Visitors and hospitality were what Kebro did and was. The aunties, as we called them, always made time for children, not a common thing in the 1960s. (There were five brothers too, three with children.)

Kebro had many visitors: cousins, nieces and nephews with varyingly numerous families, other connections. If you visited in the evening, as we usually did, other visitors would often be there too. At a certain point, the settee would be pushed back, the table pulled out and supper would arrive. Bere bannocks, floury bannocks, oat bannocks, oven scones, bread, homemade butter, cheese, jam, fancies.

By the time I was a child, the family at Kebro was the four aunties, Barbara and Celia who retired there after working at the Harray Stores, and Lilly and Violet the twins. In the summer, they would invite numerous grand nieces and nephews for a party. This could include a trip to the sands at Waulkmill, a swing in the byre, games, a walk up the hill to look for blaeberries and heather berries. The quick and daring would climb onto the very low flagstone roof of the “utility area” and clamber up to the ridge tile.

During my mother’s childhood and youth (1930s to early 1940s), there was more of a male presence at Kebro with her grandfather James S Sclater, his youngest son Sinclair, James’ brother John as well at least two of the aunties. She and her siblings went over in the holidays, walking the whole way from Rendall more than once. Among the treats auntie Lilly took them down to Waulkmill in the gig to rake cockles.

On New Year’s night, nieces and nephews, other relatives, plus families, all went to Kebro. While the adults yarned, some of the aunties told stories and entertained the bairns. And there was food of course. This was probably tailing off when I was a child but I remember at least one celebration in the late 1960s where they hired tables from a local café and we had supper in the “far end”. A relative showed one of his cine films that night.

When my mother was a child the young nieces and nephews would be invited to Kebro for Hogmanay. On one occasion, the aunties had 19 stockings to fill. Yes, they did hang them up on Hogmanay. Parents would come over on New Year’s night with food, home brewed ale and music in the old barn. No drunkenness though.

Kebro was actually two houses, but and bens, built end to end, with several more modern additions. Consequently, it was not the most convenient house, with seven doors to open to get from the kitchen to the bathroom. 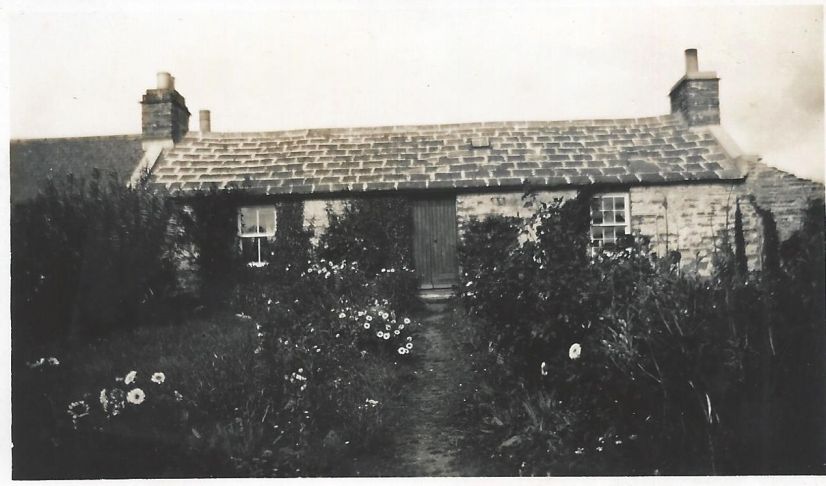 Kebro with “the door to the garden” (before some modernisation)

The front door was rarely used, in fact my mother refers to it now as “the door to the garden”. The back door was low and opened into the stone floored back area (“utility”), with the wash house at the far end. This ran the length of one house and had a sink with tap water from farm’s own private source. Opposite the sink was the bink, a work surface of shiny black stone.

Three or four stone steps led up to the stonefloored kitchen, “but”, or what we would call a living room now. Unless it was a very high day, that was always where visitors sat, the solid fuel stove providing warmth. The servant man’s room was off the kitchen and had only a skylight. Off the kitchen too was the scullery and dairy, more recent additions to the house, and very prone to condensation.

Heading out of the kitchen, there was a corridor to “ben”, the best room, where the phone was. As a result of the two houses being used as one, there was a pitch dark corridor, no more than four or five feet long, connecting ben to what would have been “but” in the second house. In my childhood this was auntie Lilly and auntie Violet’s room, complete with box bed. 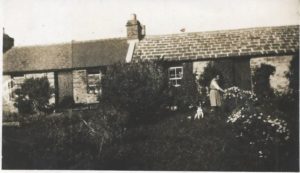 And then into another lobby, with one door leading to auntie Barbara and auntie Celia’s room, and another opening into yet another lobby. From this lobby, you could either go out into the garden or, finally, into the bathroom. I can still picture it, a room with distinctive greens and pale orange. My mother thinks the bathroom was built in the 1940s and that the aunties’ uncle John paid for it with money he inherited from a brother in the USA. Backtracking, if you went through auntie Celia and auntie Barbara’s room, you would reach the very aptly named far end! A very long way to carry food from the scullery for New Year’s night. No wonder Lilly and Violet often ran.

Looking back, we never thought there was anything unusual about the house; what remains in my memory is how neat, clean and well-cared for it was.

My x3 great grandfather Nicol Slater (1796-1875) bought Skaill and other farms from the Houton estate in February 1852. This seems to have included Kebro which in 1868 became the possession of Nicol S(c)later and his wife Barbara M Sinclair, my x2 great grandparents. It remained in the family until it was sold after auntie Lilly died in 1991. Though several family members put in offers none was successful so there are no longer Sclaters at Kebro. The house, the place of so many happy memories, is gone too, replaced by a modern house entirely unsympathetic to the setting. To be frank, it is plain ugly.

Kebro was a place for people; nothing can demolish that. The mostly hoar-headed tribe of grandnieces and nephews recall Kebro and its people with enormous affection. “A sweetie, a sweetie, we forgot to give you a sweetie”. The last call as visitors left, an undying memory of a central place from our childhood, and that of our Sclater-line parents before us.

I mainly wanted to record my own memories and those of my mother as she and a cousin are the last of their generation hence it draws on few historical sources. It’s a record for the next generations so I’d be pleased if other relatives add their memories too.