An American ‘Labor Day’ theme this week for #52Ancestors: work.  The vast majority of my ancestors were crofters and farmers, combined in varying proportions with fishing or, less frequently, a trade. This time I’m focusing on James Nic(h)olson, my paternal granny’s father, so one of my great grandfathers. (The ‘h’ creeps into the family name later.)

James was born in Brims, Orkney on 25th February 1847, the fourth of Ralph Nicolson and Helen McCaulay Ritch‘s nine surviving children. The family may have lived at Skipster at the time.  Brims is part of the island of Hoy and rightly famed for the sea-faring abilities of its inhabitants.

He married Helen Wilson on 12th December 1878 and they brought up their family of four, including my granny and her brother Wilson, at Afrigate, Brims. James died on 14 April 1937, at just over 90 years of age.

For now, this photo is all I’m going to say about his fishing, though it was a major part of his life, living only a short distance from the challenging waters of the Pentland Firth. 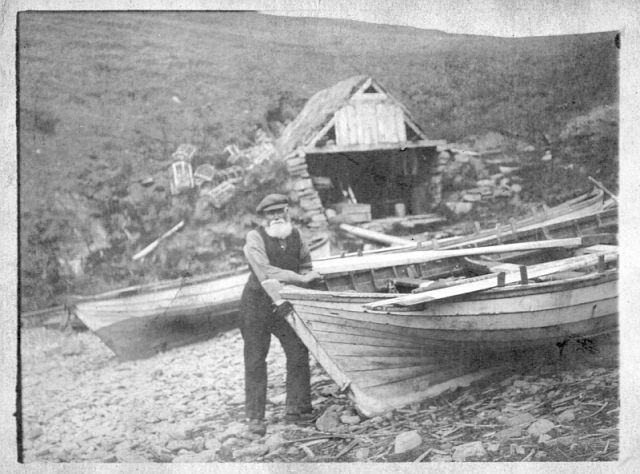 In 1888 he applied to the very new Crofters Commission to have a fair rent assessed. His application provides a good deal of information about his croft not least because in addition to his written submission, he, along with other crofters, appeared in person before the Commission. Here is a summary of his oral evidence, my comments in [square brackets].

(Mackintosh, William R (1889)The Orkney Crofters pp 73-74. For background to the Crofters Commission see this page and scroll to the foot.)

As well as farming and fishing, James was also a member of the first Longhope Lifeboat stationed at Brims in 1874. He served for 24 years and was then signal man for a further period. Even before 1874, he took part in rescues:

Excerpt from James’ letter possibly when he resigned from lifeboat service

(I have a photocopy of the whole document which looks like a letter as it includes his address but there is no addressee or date.)

An active man who lived a long life.