Grandma, as I remember her, was a quiet, elderly woman. I guess life had worn her out though some of the stories of her youth describe a woman of spirit and drive – qualities that are reflected in photographs. 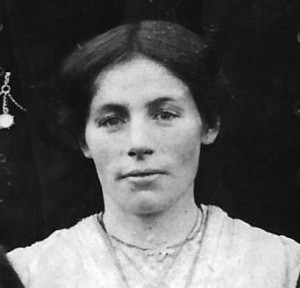 Jessie Sclater as a young woman

Jessie Sclater (1887-1970), my grandma, was the third child and oldest daughter of James S Sclater and Jessie Linklater. She was born and grew up at Kebro (see earlier blog), Orphir, Orkney.

Her father also rented the farm of Groundwater, a few miles away, from the Smoogro estate. Jessie, her older brother James, younger brother Robert and at least one sister, sometimes Violet, were tasked with running this farm. They also lived there.

Grandma was an exceedingly good manager and was able not only to return the rent money but also a profit to my rather surprised great-grandfather. It is ironic, and a sign of the times, that there was no occupation against her name in the 1911 census above. She kept a notebook with all her outgoings as well as the income from selling eggs and so on, a habit she maintained in the early years of her marriage to my grandfather, James Slater. That notebook would have been a great piece of social history if it had survived.

One story is particularly apt for ‘winter’ which is this week’s #52ancestors challenge theme.

Winters seem to have been more severe then as the Kirbister Loch, just below Groundwater, froze over at least once. (Kebro is further up the valley, off the top of this snip.)

Jessie and her sister Barbara set off with a load of eggs to take to the Mill for sale. As the loch was frozen, they decided to go across it rather than round it. A much shorter journey. It was a decision they later regretted with the ice cracking as they neared the other side. Fortunately they made it across, otherwise I might not have been here to write this.

Whether it was the same winter or not, I don’t know, but her brother Robert and a friend also went out on the icy loch on their bikes! The family home at Kebro, higher up the valley, could see them but were powerless to do anything other than panic!

Despite Grandma’s abiity to turn a profit, life was clearly not all hard work at Groundwater. Once, on a visit back home to Kebro, she put on a man’s cap and crept up along the edge of the garden wall so that only the head was visible. This supposed male visitor caused great excitement in a household of several young women.

On 21 November 1921, Grandma married James Slater, at Groundwater. Marriages took place in the early evening then; she had spent the day making oatcakes for the reception. More about their life in a future blog.