Thomas Slater died on 6 May 1868 in Kirkwall, Orkney, as the result of “a gunshot wound, tetanus 4 days”, according to his death registration. He was just 18 and a younger brother of one of my maternal great grandfathers, William H Slater.

It is from newspapers that I learned more about the circumstances of his death.  He had gone shooting with some other young men in Tankerness. While he “with singular carelessness it would seem, was in the act of drawing a loaded gun by the muzzle from a boat, the hammer was by some means released, and the charge exploded, inflicting a severe wound in the fleshy part of his arm” (The Orcadian 28 April 1868). He was taken to the Balfour Hospital in Kirkwall by cart.

The treatment was to no avail as “the shock which his nervous system sustained was so severe that convulsive fits ensued and he died on Wednesday evening last” (The Orcadian 12 May 1868). My title comes from the headline in the Orkney Herald, the other Orkney paper, on 12 May.

The articles also report that Thomas worked for the firm of Wood & Co, Broad Street, Kirkwall, and he was a “most promising young man”.

Newspapers are a hugely under-used source for family history. There are valid reasons for this, chiefly that unless you are looking for a specific event with a known date, you might have to scan years’ worth of papers to find anything. I knew Thomas Slater’s death date, so I could check local newspapers at that time.

There are indexes for some papers. Check the National Library of Scotland’s Guide to Scottish Newspaper Indexes. 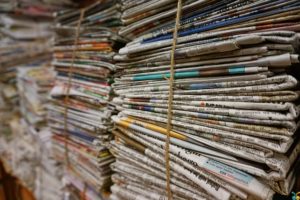 Image by Pexels from Pixabay

But things are changing. The British Newspaper Archive (BNA), and others are digitising newspapers and making them available online – and thus much easier to search. There are currently over 41 million pages from local and regional newspapers on the BNA site, with work ongoing. I’ve not found a figure for the number of titles, but geographic coverage extends from the Shetland Times in the north to the Royal Cornwall Gazette in the south. The number of issues per title varies a lot, with some going up to the 1940s or even 1950s. You can check what is available for your area of interest and try a search free of charge.The BNA is a subscription site (look out for offers) and it is included in a Findmypast world or professional subscription.

It’s worth remembering that news might appear in newspapers beyond the local area.  A man from the island of Lewis drowned in Glasgow harbour but Dundee papers carried a report. Reports of the shipwreck of William Thomson, whom I wrote about last year, appeared in a few places but not in his birthplace, Orkney, as far as I can see.

Some newspaper sites are free. I particularly like Trove (Australia). An article found there was the start of the search for a x3 great grandmother’s family from her second marriage, though she lived all of her life in Orkney as far as I know. Other sites include:

Generally, with the online sites, you can search by area (Orkney, Yorkshire etc) or title, date range, person’s name or other keyword, or a combination of all of those.  As always, common names are a challenge and it’s worth remembering that your ancestor might be Mr Campbell rather than John Campbell too.

Don’t expect 19th and early 20th century newspapers to cover events as they would today. But do check around significant dates and see what you find.

Many years of the two Orkney newspapers have recently gone on to the British Newspaper Archive, right up to the late 1940s. I’ve been talking about a few articles with my 93 year old mother and I’m delighted at the recollections they have stimulated. The tin of Brasso that fell into the milk pail on the day of the Rendall Sunday School picnic in 1938 is my favourite! My poor grandma, busy as ever, must have been in total panic as the family farm was hosting the picnic.

As with all family history, you never know what you will find when you start researching!

(Last year I did 43 posts out of 52 for the #52ancestors challenge. It was hard work and in many ways I was glad to complete the year. This week’s theme for the 2019 challenge,’ In the paper’, has inspired me to resume for a week at least.)