The “Burmese gong” stood on a shelf at my parents’ house for as long as I can remember. I knew that “hid cam fae [it came from] Thistlebank” but little more. 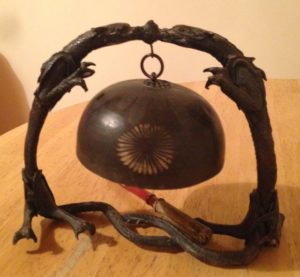 William Thomson was born in Crockness, North Walls, Orkney on 15 February 1846, the son of Henry Thomson (c 1813-1893), and Ann Sutherland (1821-1908). His father was a brother of my x2 great grandmother, Ann, which makes him my first cousin three times removed. On 2 August 1877, he married Elizabeth Gunn Omond from South Walls, Orkney, at 310 Scotland Street, Glasgow. The couple had no children. William died at Arranmore, Stromness on 5 January 1916 (He is not the William Thomson who married a Thomasina, had a child Bessie and lived in Edinburgh. Ancestry trees that slot him into that family are wrong.)

Like many young men from North Walls William went to sea, about May 1866.  He passed his master’s certificate on 24 August 1876 in Glasgow. Some years later however, In April 1893, he requested a duplicate certificate because the original certificate was

“lost or destroyed at sea by the sinking of the ship Templemore by collision with icebergs in Lat 50 degrees 20 S Long 50 degrees 40 W”.

The Templemore had left Wallaroo, South Australia, for Europe on 11 January 1893 with a cargo of wheat but was wrecked on 2 March 1893. The crew abandoned ship and two drowned when one of the two small boats capsized. The Dunboyne picked up the others, including William, two days later and took them to Port William, Falklands Islands. The Templemore sank on 10 March. (Lloyds List, 4 &18 March 1893, 15 April 1893 and Wrecksite.eu). 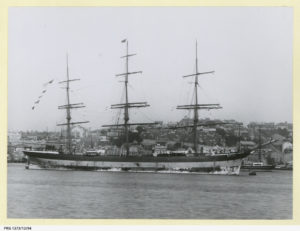 The Templemore was a three-masted steel sailing vessel belonging to Thomson, Dickie & Company (click on photo for a larger version).

“A thrilling tale of privation and heroism”

When the survivors returned to Southampton more details hit the Press. The ship had struck an iceberg “as high as a church” in fog, all 26 on board escaped in two boats, one of which capsized though all but two were picked up. For five days they were in an open boat

“with nothing to eat but 8 pounds of biscuits between 24 of them, and water obtained from the floating ice. Captain Thomson was seized with an illness, but his wife took an oar, and pulled like a man for the whole five days… When help came, 12 of them were prostrate and apparently dying in the bottom of the boat. Their hands and feet were completely frozen. Eventually they were taken by a sailing vessel to the Falkland Islands, from thence they were sent to Monte Video, and then on to London and Southampton.”  (Eastern Daily Press [Norwich], 1 May 1893 p 8).

Five days or two? I’m rather more inclined to trust Lloyds List but am still checking. William was back at sea by the end of the year and probably far sooner, for the Arranmore, master Thomson, arrived at Rio from Greenock on 15 December 1893 (Glasgow Herald, 20 December 1893, p 8).

After what was no doubt a very eventful life, William retired to Stromness, Orkney by 1901, and lived at Arranmore. He and his wife donated many items from their travels to the Stromness Museum. They must also have given gifts to William’s cousins, the Sinclairs at Thistlebank, Stromness, from where the gong made its way to my family.