All the surviving photos show John Ross as an older man with a white beard. Perhaps it was grey earlier, like the Ancient Mariner.

John, my great grandfather, spent his whole life in Orkney, crofting and fishing in the parish of Walls. Beyond the bare biographical details, I sadly know very little about him. This is surprising to some extent as my father spent his whole childhood next door and regularly went fishing with John.

In his younger days, while at the herring fishing, he met Ann Flett whom he married in 1886. She was a cook for his older sister Janetta, Mrs Charles Sinclair, in Stromness. Within a few years, he rented his own croft, Elster near Lyness in North Walls. By 1901, he had moved to Lyness Point, another croft. (Map – Elster is between Pittaquoy and Gear)

I’m still searching for a photograph of that area before Lyness as a whole was taken over as a naval base.

The First War brought many trials, including naval men who landed and walked over John’s very conveniently placed croft.

“The grass and crops are trodden and spoiled, so that as I pointed out the tenant is only able to keep the same stock and make the same profit on the two places he now holds as he formerly did on the one”, wrote the factor Duncan J Robertson. The second croft was East Millbay which he was certainly renting from 1910.

John was prepared to accept £3.10.0 compensation for damage done over the previous three years. His rent at the time was £7.5.0.  (I am grateful to Brian Budge, Orkney military historian, for this information from TNA ADM 116/1546 Lyness – Establishment of base1916-1918.)

In 1921, John and family moved to Wellbraes, Crockness, where his son, John (my grandfather), had just taken on the rent. My grandfather was a joiner so it must have been very useful to have his father there to take on some of the work on the croft. 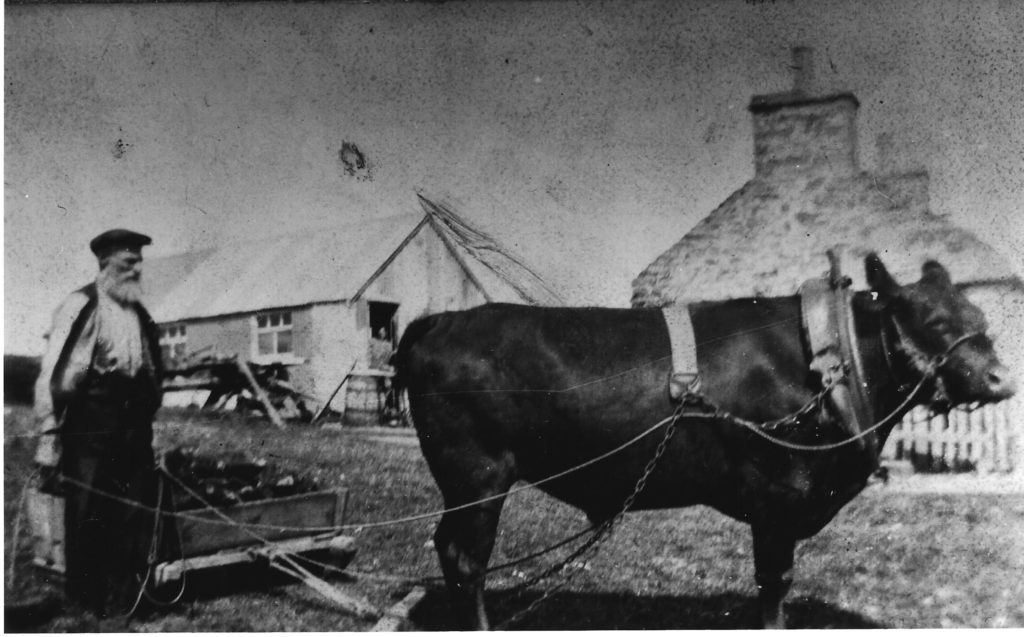 John was an active man for he built a good pier in front of Wellbraes (the one you can see in this photo) and may well have worked a planticru on the edge of the Crockness hill (thanks to Jimmy Hamilton for that information). Other sources told me that he did butchering for other crofters and was generally quite a learned man.

John was born on 23 October 1854,  the seventh of Hugh Ross and Ann Thomson’s ten surviving children. He was baptised John George Heddle Ross on 26th December the same year. “John” may have been after his father’s youngest brother, uncle John. The full name, however, was most certainly a nod towards the landlord, John G Heddle of Melsetter (1819-1869). Though it was not unusual to name a child after a local notable, such as the laird or the minister, John was the only one in the family, apart from a sister, with more than one name. I wonder if there was perhaps some need to flatter Mr Heddle at the time?

Late in life, John and his wife Ann, moved to Orphir to live with their daughter, Janetta, and her husband, Bill Clouston. This was Ann’s birth parish and she had wanted to go back. He died there on 22 June 1945, 18 months after Ann, and the last of his siblings..

Their family was small, just Mary Ann, John, my grandfather, and Janetta.

A post on the theme “Beard” for the #52ancestors challenge.